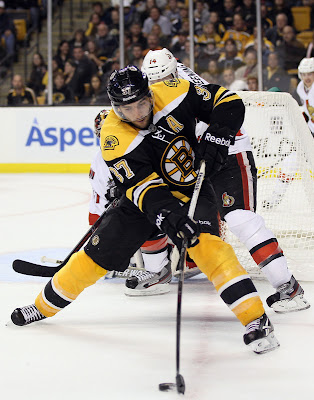 NHL: Despite an awful October and falling behind early to the white-hot Senators early, the Boston Bruins were able to rally and snap Ottawa's 6-game win streak on Tuesday night at the Garden.

Nick Foligno got the Sens on the board about 5 minutes into the 1st before Milan Lucic evened things up for Boston with a power play goal two minutes later. However, about 15 seconds later, a shot from Ottawa's Stephane DeCosta found its way past Thomas and into the back of the net to give the Sens the 2-1 lead heading into the first intermission.

The Bruins would go on to tie up the contest at 2-2 when Patrice Bergeron beat Sens netminder Craig Angerson just over 4 minutes into the 2nd period before taking a 3-2 lead with 2 minutes remaining in the 2nd on a Chris Kelly even strength tally.

Ottawa would knot things up at 3-3 however thanks to Jared Cowan's goal 5 minutes into the 3rd before the B's would take the lead (for good) on a Johnny Boychuk tally about 90 seconds later. From there, the Bruins would get some insurance in the form of a Danny Paille tally 7:18 into the 3rd.

So the Bruins turn the page on a crappy October by stopping the streaking Sens with a 5-3 final at the Garden on Tuesday. The B's actually outshot the Sens by a 41-26 margin, with Thomas turning aside 23 of the shots he faced. Boston also was able to convert one of their five power play opportunities while the Sens were held scoreless with the extra attacker on the ice.

The Bruins next game will be against the Toronto Maple Leafs at Toronto on Saturday night. The puck drops at 7 PM ET and the game will be televised on both NESN and CBC's Hockey Night in Canada. 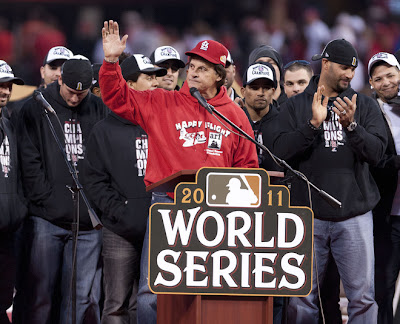 LaRussa's 33 year managerial career also saw him managing the Oakland Athletics to a Worls Series title during the 1989 'earthquake series' against the San Francisco Giants. Between his time with the White Sox, A's and Cardinals, LaRussa has 2728 career wins to his credit.

Random thought: Would that be ironic if Terry Francona ended up replacing LaRussa as the Cards manager?

OTHER RED SOX NEWS: 1B Adrian Gonzalez, 2B Dustin Pedroia and CF Jacoby Ellsbury became the first trio of Red Sox to win Golden Glove awards in 32 years. The winners were announced by Rawlings on Tuesday night.

LOS ANGELES DODGERS: The Dodgers and MLB announced they had entered into an agreement for a court-supervised sale of the franchise. Reportedly the interested parties include Dallas Mavericks owner Mark Cuban and Pittsburgh Penguins co-owner Ron Burkle as well as a number of Asian investors.

Even if a buyer is quickly found, it could take anywhere from 6 months to a year and a half for MLB to approve the transaction.
Posted by Fenway_Nation at 10:07 PM