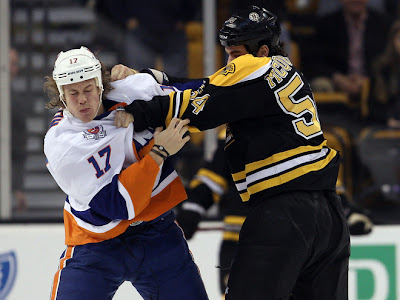 NHL: Don't look now, but the defending Stanley Cup Champion Boston Bruins have been on a tear lately, breaking up the Ottawa Senator's 6-game win streak last week and shutting out the Maple Leafs 7-0 thanks to Tyler Seguin's first career hat trick over the weekend before returning to Boston to host the New York Islanders on Monday night.

The Bruins opened up the scoring with a tally from Benoit Pouliot barely 90 seconds into the 1st period, although the Isles Matt Moulson would knot up the score about 4 minutes later with an even strength goal. The B's were then able to convert a power play opportunity on a Nathan Horton tally at the 13:38 mark, followed by a Tyler Segiun even strength goal about 30 seconds later to make it 3-1 Bruins.

By that point, the Islanders decided t pull goalie Evgeni Nabakov- who had allowed 3 goals on 9 shots- for Al Montoya. Then, with just over 90 seconds remaining in the 1st, the Isles Michael Grabner made it a 1-goal game with a shot that beat Tukka Rask at the 18:36 mark.

After a scoreless 2nd period, the Bruins broke it open in the 3rd with goals from Milan Lucic, Nathan Horton and Davic Krejci (the latter coming on an empty netter) to seal the 6-2 win for Boston's 3rd straight win.

Not even one week into November, the Bruins have won as many games as they have for the month of October. Tukka Rask turned aside 24 of the 26 shots he faced for his first win of the season and the B's converted on their only power play opportunity of the evening.

The B's will next take on the Edmonton Oilers at the Garden on Thursday night with a 7 PM Start time. 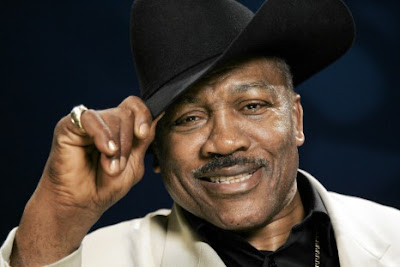 Born and raised on South Carolina, Frazier became interested in boxing when his parents purchased a black and white TV and relatives compared his build to Joe Louis. At age 15, he moved in with relatives in New York City and after winning some amateur titles, he tried out for the US Olympic team, being the only American to win the gold medal in the 1964 Summer Olympics in Tokyo.

Frazier is perhaps best known for the 1971 'Fight of the Century' at Madison Square Garden where he took on Mohammed Ali. In a contest between two undefeateds, Frazier managed to best Ali in 15 rounds.

Frazier was diagnosed with liver cancer at the end of September this year and entered hospice care a week ago. NFL: This had Deja-vu written all over it.

The rematch of Superbowl XLII got off to a pretty slow start. For the first time in nearly 5 years, the Patriots were held scoreless at the half (thanks in part to a missed Gostkowski FG attempt from the Giants 27 before the end of the 2nd quarter). However, the visiting Giants were also held scoreless in the first half, leading to very few highlights with an 0-0 score for the halftime report.

In the 3rd quarter, the Giants would get out to a 10-0 lead before the Pats would get on the board thanks to a Gostkowski FG from 32 yards to make it 10-3.

Most of the game's action would take place in the 4th quarter, where just 32 seconds in, Brady would connect with Aaron Hernandez for the Patriots forst TD of the day to tie things up at 10-10. The drive started when Giants QB Eli Manning threw an interception to New England CB Kyle Arrington in the end zone.

The Patriots would take their first lead of the day on the next possession, with Gostkowski connecting on a 45 yard FG attempt to make it a 13-10 game. However, the Giants put together a 4-minute drive to go up 17-13 late in the 4th. The Patriots and Tom Brady would respond with a drive taking all of a minute and 22 seconds off the clock, capping it off with Brady connecting to Gronkowski on 4th and 9 to make it a 20-17 game.

With 1:36 left in regulation and starting from their own 20 (and aided by some awfully goddamned stupid penalties from the Patriots D) the Giants responded by moving the ball down the field, taking up huge chunks of yardage and finding themselves on the New England 1 with all of 30 seconds remaining in regulation thanks to a pass interference penalty. With 15 seconds remaining, Manning would connect to TE Jake Ballard to put the Giants up 24-20.

And that would be the final, as New England couldn't do anything with the remaining time in regulation. The Patriots fall to 5-3, setting up an important contest next Sunday night between the Jets and Pats.

Although both the Jets and the Bills have an identical 5-3 record, New England is still in first place heading into the Sunday Night game against the Jets. Sunday's home loss was their first regular season loss at Gillette stadium in nearly 3 years. 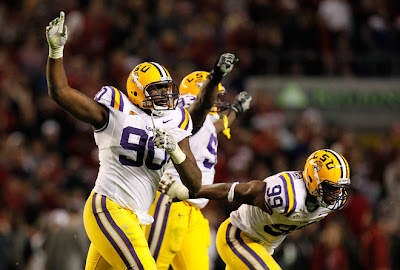 NCAA FOOTBALL: You'd think for a "Game of the Century", somebody would've managed to have found the end zone!

Keep in mind we're only 11 years into this century, but this was the first time since the 1966 Notre Dame/Michigan State game that a #1 and #2 ranked team played each other in the regular season.

So with all eyes on Tuscaloosa, AL, the game of the 21st century kicked off Saturday night in what turned out to be a rather low-scoring affair, with both teams headed to the locker room with the game tied at 3-3. Unbelievably, regulation would end with each team tied at 6-6, forcing OT.

Alabama's 1st possession of the OT featured them losing 5 yards on offense, QB AJ McCarron getting sacked for another 5 yard loss and a missed FG attempt before turning it over on downs and giving the LSU tigers a chip-shot FG for the win (this was after a TD call was overturned by officials, saying that the reciever was out of bounds).

According to CBS, this was the highest viewed NCAA football game they began tracking viewership in the 1980s. I don't find that difficult to believe, since during the first half I was having dinner in a venue not know for it's affinity for sports, but alot of regulars were clustered around the one TV in the place watching the game....probably hoping SOMEBODY would score a TD (altho' to be fair, the 1966 'Game of the century' was even more anticlimatic). 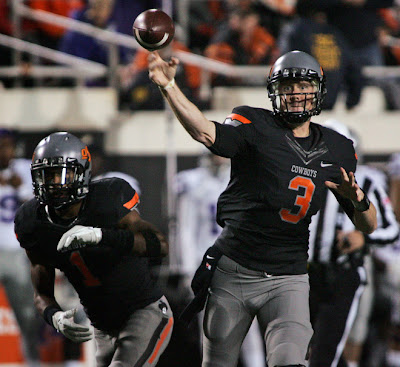 ELSEWHERE IN NCAA FOOTBALL: I was actually getting bored with the LUS/Alabama game, so once in the car, I was randomly scrolling through games on XM and came across the Kansas State/Oklahoma State game. This one turned out to be a polar opposite of the LSU/'Bama game, with 32 points being scored in the 4th quarter. Down 45-52 with 2:16 to go in regulation and starting from their own 29, Kansas state managed to drive all the way down to the Cowboys 5 yard line, but was unable to manage to find the end zone on three consecutive plays and with less than 5 seconds on the clock.

#2 Oklahoma State hangs on to win by the 45-52 margin and will face the Texas Tech Red Raiders this upcoming Saturday.

PENN STATE: Penn State Athletic Director Mark Curley and Senior Vice President for Finance and Business Gary Schultz have been charged with perjury and failure to report after former Nittany Lions defensive coordinator Jerry Sandusky was arraigned on charges of sexual assault. Sandusky set up a charity in 1977 called Second Mile to encourage troubled or neglected youth to achieve in sports and academic. Sandusky is accused of coercing or sexually assaulting a number of children from the Second Mile program over the years.

BOSTON COLLEGE: Well, that 38-7 spanking administered by the Florida State Seminoles at Chestnut Hill was broadcast on ESPN for all to see last Thursday.

Boston College hopes to put on a better performance against the 5-4 NC State Wolfpack on Saturday afternoon at 12:30 at Chestnut Hill.

UCONN: The UConn huskies headed into their Bye week with a 28-21 win over the Syracuse Orangemen on Saturday. After taking this weekend off, tehy'll host the Louisville Cardinals at E. Hartford on November 19th.
Posted by Fenway_Nation at 9:14 PM