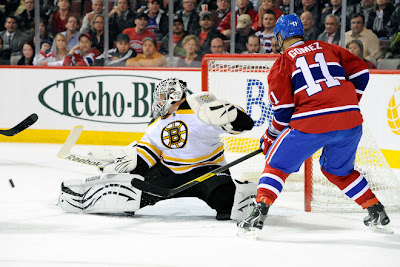 NHL: Fresh from a convincing 6-0 win against the New York Islanders this weekend, the Bruins headed north to Montreal to try their 9th consecutive win Monday evening.

The Bruins got off the the early 1-0 lead in the 1st after Andre Ference managed to get the puck past Habs netminder Carey Price. And that would be it as far as the scoring from either side was concerned- Tim Thomas would turn aside all 33 shots he faced while Carey Price turned aside 17 of 18 shots faced. The Bruins even managed to kill a double-minor that was assessed to them late in the 2nd period.

The last person to score against the Bruins was the Blue Jacket's Derek MacKenzie in the 2nd period of the November 17 game against Columbus. Tim Thomas now has a career regular season total of 29 shutouts (after heading into this past weekend with 27). Monday night's win also puts the Bruins in 1st place in the Northeastern Conference (tied with the Sabres for points, but Boston gets the tiebreaker after winning the only head-to-head matchup so far).

Speaking of Buffalo, the Bruins will travel next to western New York to take on the Sabres who are coming off a 4-2 loss to Phoenix over the weekend. The puck drops at 7 PM Eastern time and the game will be televised on NESN and the MSG network.

I have to say, I figured it would only be a matter of time before the Bruins broke out of their slump and got their proverbial shit together- but this was taking place much sooner than I anticipated. Nothing puts that crappy October in the rearview like a 9-0 November.

ELSEWHERE IN THE NHL: Pittsburgh Penguins Center Sidney Crosby returned to the ice for the first time since January on Monday night, tallying 2 goals and 2 assists in the Penguins 5-0 win over the Islanders at Pittsburgh's Consol Energy Center.

Crosby was sidelined with concussion-like symptoms after receiving multiple hits to the head on two different nights in January of 2011. 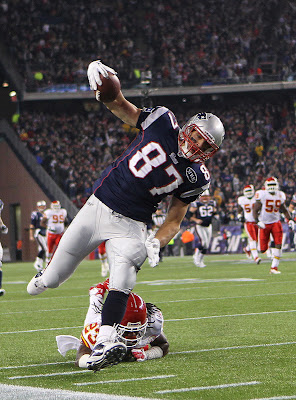 NFL: As it tuns out, week 11 was bookended by a couple of games that were pivotal to the AFC East playoff picture.

Heading into Monday night's game, the Patriots were well aware that they could increase their lead on the Jets after their Thursday night loss at Denver. New England had an AFC West opponent of their own on Monday Night's nationally televised game as they took on the 4-5 Kansas City Chiefs.

When they scheduled this game, they probably figured it would be some sort of reunion between former Kansas City QB Matt Cassell and some of his former teammates in New England. However, Cassel ended his season after breaking his hand last week, with the Chiefs starting Tyler Palko instead.

The Kansas City defence, beset by similar injury woes as the Patriots, were able to pressure Tom Brady, occasionally giving extra coverage to receivers like Rob Gronkowski and Aaron Hernandez. After a penalty inside the Patriots 10 pushed them back, the Chiefs would get on the board first with a 25 yard FG from Ryan Succop to give KC the early 3-0 lead.

Feeling pretty aggressive, the Chiefs attempted an onside kick, only to hand the ball to New England after one of the Chiefs players touched it before it had travelled the minimum of 10 yards. The Patriots would get as far as the Chiefs 30 before Brady was sacked and KC recovered the fumble, although nothing came from their ensuing possession.

The Patriots finally got on the board with 4:18 to go in the 2nd quarter after Brady connected with Rob Gronkowski at mid-field before he ran along the sidelines to put New England up 7-3. New England would then get good field position after CB Kyle Arrington intercepted a tipped pass from Tyler Palko and returned it for 28 yards. The Chiefs, however, managed to lock things down after the Patriots got as far as the KC 3 yard line, meaning that New England had to settle for a short FG with 10 seconds remaining in the 1st half to make it a 10-3 Patriots lead.

You know that tired and worn-out phrase "A tale of two halves"? It actually applies here. Kansas City simply went away and New England scored 24 unanswered points in the 2nd half to make it a 34-3 final. Brady went 15 for 27 with 237 yards and 2 TDs while Rob Gronkowski had 4 catches for 96 yards and 2 TDs in the (second-half) blowout against Kansas City.

The win further opens up a gap in the AFC east with Buffalo and the Jets. New England will next take on the Philadelphia Eagles from Lincoln Financial Field in Philly on Sunday with a 4:15 ET/ 1:15 PT kickoff. 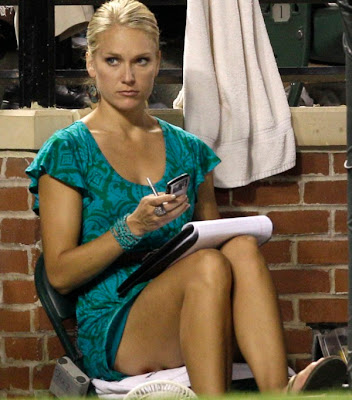 MLB: The saga of the 2011 Red Sox continues to unfold like a country western song where the crooner loses everything nearly two months after their late season implosion. If the loss of Epstein in the front office, Francona in the dugout and Papelbon in the bullpen wasn't enough, it's looking as though NESN sideline reporter Heidi Watney will be departing Boston to work the sidelines and pregame shows for Time-Warner Cable in Southern California [which could very well include the Lakers if they ever have a season- NANESB!].

A California native and graduate of the University of San Diego, Watney arrived in 2008 from an ESPN radio affiliate in Fresno, CA replacing Hazel Mae who was leaving for the then-nascent MLB network.

OTHER RED SOX NEWS: Former New York Mets manager Bobby Valentine formally interviewed with the Boston Red Sox this week. Valentine was an unexpected candidate for the position that Dale Sveum, Sandy Alomar Jr, Gene Lamont and others had interviewed for in the past couple of weeks. 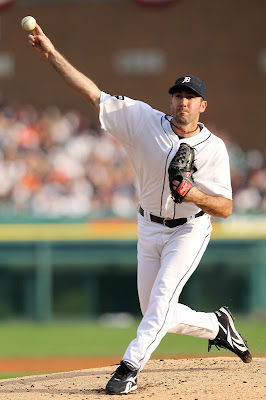 OTHER MLB NEWS: One week after being announced as the American League Cy Young winner, Detroit Tigers pitcher Justin Verlander was named the AL MVP for 2011. This makes him the first pitcher to get the AL MVP since Oakland's Dennis Eckersley got the nod in 1992.

ELSEWHERE IN MLB: Seattle Mariners outfielder Greg Halman was found stabbed to death by Dutch police in his Rotterdam residence. Police and paramedics were reportedly called to Halman's home and found him bleeding from stab wounds, but were unable to revive him.

A police spokeswoman said that Halman's brother is being held as a suspect, although they aren't allowed to disclose his name under Dutch law.

The #22 ranked Notre Dame Fighting Irish managed to hold off a late rally from Boston College at South Bend on Saturday, recovering an onside kick with 2 minutes to go after the Eagles had closed to within 2 points late in the 4th. Trailing 16-7 with about 3 and a half minutes to go, Boston College started out on their own 22 yard line and managed to take all of 1:41 off the clock before punching it in from the Notre Dame 7 yard line to make it a 16-14 game before attempting the onside kick. However, the Irish recovered at the Eagles 48 yard line, and although they went 3 and out, the ensuing punt pinned Boston College deep in their own end. Not even a series of laterals as the clock ran out could help the Eagles as they went on to lose by a final of 16-14.

For the season finale, Boston College travels to Miami to take on the University of Miami Hurricanes on Friday, November 25th at 3:30 PM ET.

ELSEWHERE IN NCAA FOOTBALL: After Oklahoma State's loss to Iowa State on Friday night, it turns out there were some more top 10 upsets in the works.

Fresh off their loss to Boston College, the NC State Wolfpack simply steamrolled over #7 Clemson by a 37-13 final.

The fourth-ranked Oregon Ducks are no longer a one-loss team after missing a last-second field goal attempt in the final seconds of regulation against the USC Trojans, losing by a 38-35 final. 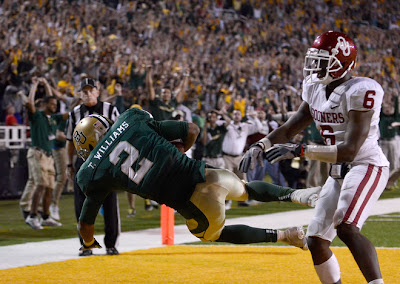 For the first time in 20 meetings, the Baylor Bears figured out a way past the #5 Oklahoma Sooners in a thrilling contest Saturday night, with the Baylor Bears snapping a 38-38 deadlock with a quick drive capped off by a pass from QB Robert Griffin to WR Terrance Williams to give Baylor the 45-38 win (which now further complicated the Big 12 playoff picture).
Posted by Fenway_Nation at 7:27 PM