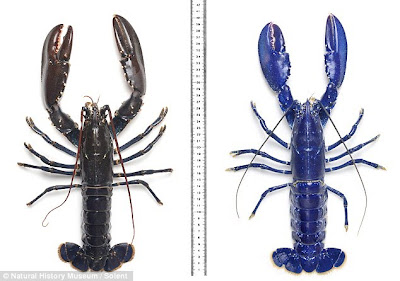 An azure lobster pulled from the waters off the east coast of Scotland has found a home at the London Aquarium after being purchased from a fish market.

The buyer, Rex Goldsmith, said he paid market price for the pastel lobster at a London fish market, but rather than cook it, he contacted researchers from the Natural History Museum who confirmed that it was a European Lobster but developed the darker blue tone due to a rare genetic variant. The European lobsters are fairly common and can be found in the Atlantic waters anywhere from the UK and Norway to the Azores and Morocco. However, they are normally a much darker shade of blue- almost indistinguishable from grey or light black.

In 2009, a cobalt-blue lobster was caught off the coast of New Hampshire before being turned over to the New England Aquarium. Researches at the New England aquarium attributed the odd hue to an antioxidant known as astaxanthin that bonded with the lobster's shell.
Posted by Fenway_Nation at 4:04 AM