Today's Train of Though- Fleeting Blaze of Autumn in the Last Frontier, November 29th 2011 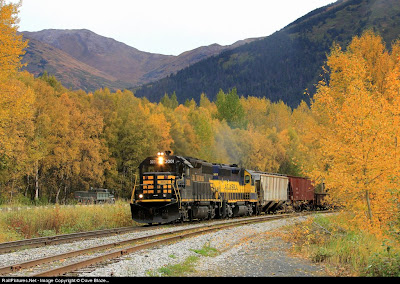 Today's Train of Thought takes us to the state of Alaska, where according to railpictures.net contributor David Blaze, the peak fall foliage season lasts all of a day or two.

However, those rather severe limitations on autumnal photography in the Last Frontier didn't prevent him from heading trackside.

With clouds scraping the peaks of the Chugach Range in the background and flanked by brilliant golden aspen trees, Alaska Railroad GP40-2s #3001 and #3011 head north past the lengthy siding at Indian, AK with a 27 car train picked up from the barge at Whittier. The cars are from Canadian National's 'Aqua Train' barge terminal in Prince Rupert, BC and are enroute to the ARR yard in Anchorage.

As a bonus, the lead unit- ARR #3001- is still sporting it's as-delivered 1970s era paint scheme while the trailing #3011 is showing off the latest paint scheme. Apparently since that ARR has no painting facilities of its own, locomotives can only be repainted while being sent to the lower 48 for rebuilding, overhaul or other heavy maintenance.
Posted by Fenway_Nation at 11:38 PM