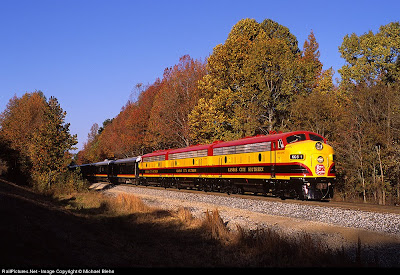 Today's train of thought takes us to the Ozarks near the Arkansas/Oklahoma border. Apparently when shooting their company calender, the Kansas City Southern had the change of season in the Ozarks in mind when the railway's F units and office cars were repainted into the striking 'Southern belle' paint scheme reminiscent of KCS's earlier diesels- although F9A #KCS1 was purchased from VIA Rail Canada.

Here, railpictures.net contributor Michael Biehn caught the A-B-A combo of brightly painted F Units as they made their way through Howard, AR, seemingly trying to one-up the surrounding fall foliage for their calendat shoot on a sunny November 8, 2007.

The F units are a few days out of the paint shop, having made their debut by hauling an intermodal train over the KCS Vicksburg subdivision. The paint scheme seems to have stuck, with subsequent units from brand new ES44AC GEVOS to rebuilt, lower emissions 2nd generation locomotives like the GP22ECO
Posted by Fenway_Nation at 11:07 PM