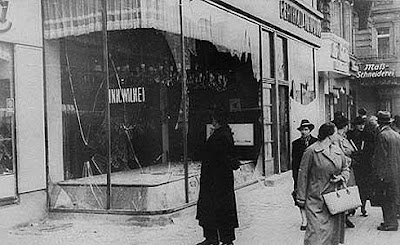 The overnight hours of November 9-10 1938 were marked by coordinated attacks against Jewish homes, businesses and synagogues throughout Germany and Austria in what was to be known as Kristallnacht- or 'Night of the Broken Glass'. The 1938 pogrom considerably ratcheted up persecution of Jews in Germany and Austria (which had been annexed earlier in 1938) by the ruling nazi party.

"It marked a dramatic escalation of the persecution of Jews in Germany," said retired professor Gerhard Weinberg.

The personal accounts gave a firsthand look at that night.

"They ripped up the belongings, the books, knocked over furniture, shouted obscenities," Harris said.

"Houses of worship burned down, vandalized, in every community in the country where people either participate or watch," Gerhard said.

They served a reminder of what happened and what was to come.

"People were coming in and destroying their family heirlooms, that kind of shock just shook their entire world and then the catastrophe of holocaust and its aftermath," said Thomas Louchheim, the co-chair of the Yom Ha Shoah Memorial Service.

And they served as a warning of what can happen in the future.

"Horrible things can happen when people don't care, or are silent," Harris said.

When Hitler assumed power in 1934, Jewish-owned shops were frequently attacked and vandalized by the paramilitary arm of the nazi party while they called for boycotts of Jewish run businesses. The following year, the Nuremberg laws were passed, which virtually eliminated the right of Jews in Germany to work, travel or vote.

Kristalnacht itself was reportedly sparked by the November 1938 shooting of a German diplomat in Paris by a Polish Jew who had been expelled from his Hannover home [although after the war it was apparent that the nazi regime was searching for any pretext to begin a widespread expulsion, imprisonment or extermination of Germany's Jewish population while destroying or seizing their property in the process- NANESB!]. Encouraged by the nazi SA stormtroopers, German civilians also took part in the lootings, assault and arson that fateful autumn night.

Now I guess this is the part where I heave a sigh of relief and say to myself 'I for one am glad that I don't live in a country that has roaming gangs of thugs indiscriminately attacking & intimidating people, vandalizing businesses and torching structures with tacit government approval'.

But hold the phones- what's this? 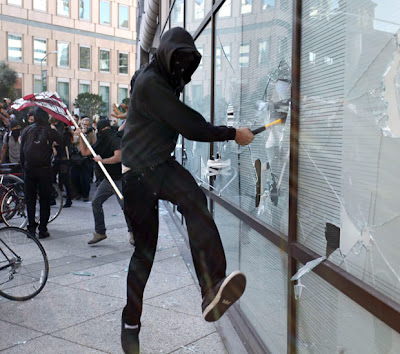 Keep in mind that that above image is not Bonn circa 1938, but rather Oakland, CA circa November 2011. The happy little hooded window-smashers depicted above are anarchists who have embedded themselves with the #OccupyOakland movement (although numerous #Occupy supporters insist that they're actually provocateurs sent by Homeland Security or the Oakland Police- y'know, because nothing is EVER their own fault). And while invoking Godwin's Law is the oldest trick on the internet, the whole #Occupy movement doesn't seem to be the least bit disturbed by their movement calling for a totalitarian ideology while their members blame a historic scapegoat for this nation's problems:

After skirmishes with police last week in which an ex-Marine was injured, #OccupyOakland called for a general strike and shut down the port while marchers and anarchists began smashing windows in storefronts, grocery stores and banks- even businesses that had expressed support for the #Occupy protests. 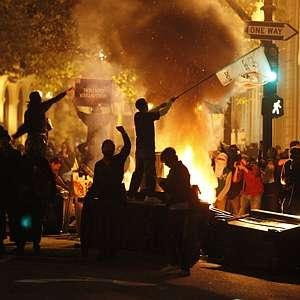 The apparent target of #OccupyDC's actions at the Convention Center (including using children as human shields) was the politically active billionaire Koch Brothers. That right there should be a dead giveaway that the entire #Occupy movement is nothing more than contrived leftist astroturf seeing as how they're remarkably quiet about President Obama's cozy relationship with wealthy bundlers like John Corzine or George Kaiser.

And lest you think I'm being too hyperbolic with the #Occupy/nazi comparison, the #Occupy movement has been endorsed by the American nazi party, complete with AR-15 toting neo-nazis showing up at #OccupyPhoenix.

For those of you who think the comparison to the nazi SA storm troopers is over-the-top and uncalled for, I give you the teachings of the Reverend Jim Jones and the People's Temple:

So tell me, how out of place would such a sermon be at one of the #Occupy demonstrations and sit-ins?
Posted by Fenway_Nation at 10:27 PM