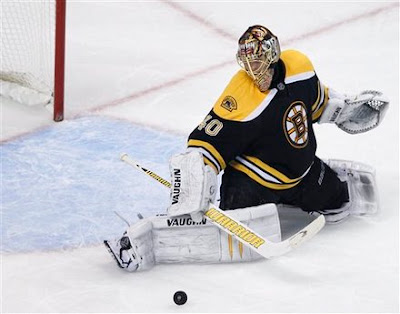 NHL: After a frenzied 4-3 win over the New Jersey Devils earlier this week, the Bruins were set to continue their torrid November by closing out their homestand with a home game against the struggling Columbus Blue Jackets.

This one turned out to be a pretty light-scoring affair, with a scoreless first period. Early in the 2nd period, Blue Jackets C Derek MacKenzie got Columbus on the board with a power-play goal while a little over 2 minuets later, Adam McQuaid got one past Curtis Sanford on an even strength goal to make it 1-1.

Of course, a scoreless 3rd period means overtime, and the scoreless overtime means a shootout! Tukka Rask stopped two out of three shots faced while Sanford allowed goals from David Krejci and Rich Peverly. Rask made the game clinching save on a shot from the Jackets' Antoine Vermette to end the shootout and send Boston to its 7th consecutive win, sweeping the 5 game homestand.

Rask had 30 saves on 31 shots faced while Columbus' Sanford stopped 26 of 27 faced. The Bruins had only one power play opportunity which they didn't capitalize on, while the Jackets went 1 for 2 with the man advantage. While the Bruins had won an earlier shootout on Oct. 15th at Chicago, this is the first shootout win for Tukka Rask on the season.

The defending Stanley Cup Champions (who are starting to play like it) will next travel to Long Island where they will take on the 5-8-3 New York Islanders on Saturday Night. The puck drops at 7PM ET and the game will be televised on NESN.

OTHER BRUINS NEWS: Quebec's director of criminal prosecutions announced that they had declined to pursue charges against Boston Bruins captain Zdneo Chara over a March 2011 on-ice hit against Montreal's Max Pacioretty that sent him into stanchion and left him with two fractured vertebrae.

Chara had received a game misconduct penalty, but no further sanction from the NHL in the last 8 months since the hit.

NFL: Last week's Thursday night all-AFC West game was of some interest simply because it was the first Thursday night game since the season opener between the Packers and the Saints at Lambeau Field[for some reason, I also dug the ad that showed a Jets fan making his way to his favorite watering hole after being crowded and jostled on a subway car while (presumably) thousands of miles away, a Broncos fan was finishing up at a ranch and making HIS way through the a remote, rutted high plains dirt road in an old Suburban before arriving at his respective tavern (which appeared to be the only structure around for miles) to watch the same game as the Jets fan- NANESB!].

As a New England fan, this week's Thursday night game was of some interest because it featured the Denver Broncos taking on the Patriot's next closest division rival, the New York Jets. The game from Sports Authority Field at Mile High got off to a slow start, with each team trading field goals and heading into the half tied at 3-3.

The Jets would then come out and score a TD on their first possession of the 2nd half to take a 10-3 lead. However, the Broncos would come right back to tie things up at 10-10 after Broncos CB Andre Goodman intercepted a Mark Sanchez pass and returned it 26 yards for the pick-6. The Jets would re-take the lead early in the 4th quarter after a 45 yard Nick Folk FG attempt was good to make things 13-10. With 5:54 remaining in regulation, the Broncos got the ball back on their own 4 yard line, starting QB Tim Tebow ended up calling his number plenty, with five carries for 37 yards (as well as a pass to Dante Rosario and a run by Lance Ball) to set up 3rd and 4 from the Jets 20 yard line with a minute and 6 seconds remaining in the game, setting up this:

With that, the Broncos took the late 17-13 lead over the Jets. Mark Sanchez would get the ball out as far as the Denver 44 yard line before the clock ran out.

The Broncos win this one by a final of 17-14, knocking the Jets down to 3rd place in the AFC East. The Patriots will close out week 11 with a Monday night game against the Kansas City Chiefs from Foxborough, MA. 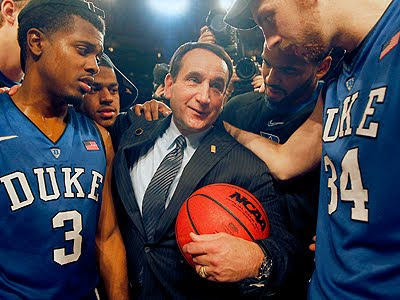 OKLAHOMA STATE: Oklahoma State women's basketball head coach Kurt Budke and assistant coach Miranda Serna were killed in a plane crash on a recruiting trip to Arkansas. The single-engine plane was owned and piloted by Bransetter- he and his wife were also killed in the plane crash.

Budke and Serna had been with Oklahoma State since 2005. The NTSB is investigating the cause of the crash.

SYRACUSE: Just weeks after the Penn State child molestation scandal shocked the college sports world, a former Syracuse Orangemen ballboy is accusing assistant coach Bernie Fine of molesting him and his stepbrother over a span of several years starting in 1984.

Bobby Davis and Mike Lange allege that they were molested by Fine at Syracuse practice facilities and on road trips. Fine denies the charges by the two men, who are now 39 and 45 respectively.

The Syracuse chancellor said that they were contacted in 2005 about allegations he had previously reported to police regarding Fine. The University claims that it conducted it's own internal investigation and that people the accuser said would support his claims denied any knowledge of wrongdoing on Fine's part. Syracuse police declined to pursue the case because the statute of limitations had expired.

NCAA FOOTBALL: A little like the NFL, although most of the action is typically supposed to take place over the weekend, we were treated to some pretty good televised games throughout the week. 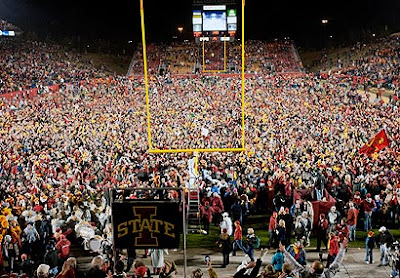 BIG 12: Undoubtedly the biggest shock from this week's slate of weeknight games came on Friday Night with Iowa State upending the Oklahoma State Cowboys bid for a perfect season before the December 3rd Bedlam game against the Sooners.

The game took place in Ames, IA and had the Cyclones trailing 17-7 at the half, only to fall even further behind after the Cowboys scored on their first possession of the 2nd half to make it 24-7. From there, however, the Cyclones would go on to score 17 unanswered points, tying the contest up at 24-24 with 6 minutes left in the 4th on a 7 yard Jared Barnett pass to Albert Gary for the game-tying TD, forcing overtime.

For the first OT, the Cyclones and Cowboys traded TDs, while Oklahoma State's Brandon Weeden was picked off to start off the 2nd OT. With the short field, Iowa State's backup RB Jeff Woody rushed for the game-winning TD to give the underdog Cyclones the 37-31 win against #2 (and previously undefeated) Oklahoma State.

Depending on what happens to the #5 Sooners, who travel to #25 Baylor this weekend, the December 3rd Bedlam game could very well determine the Big 12 title.

ACC: After falling behind early to the North Carolina Tarheels, #9 Virginia Tech managed to put up 24 points in the 2nd and 3rd quarter before having to hold off a late rally from the Tarheels in the 4th.

The Tarheels would score 2 TDs in the 4th, including a Bryn Renner pass to WR Erik Highsmith. After scoring a TD to make it a 24-21 game, the Tarheels attempted an onside kick that they did recover, but it didn't travel the required 10 yards, so Virginia Tech got the ball back and pretty much ran out the clock.

The win, coupled with a Virginia loss to #23 Florida State this weekend, would give the Hokies the ACC Coastal Division title.

MAC: Pretty good game on Tuesday night between Ball State and Northern Illinois. The NIU Huskies fell behind early by a 14-0 margin, but were able to come back and win by a 41-38 final. Meanwhile, the Ohio Bobcats got by the Bowling Green Red Falcons on a Field Goal as time expired to win by a 29-28 final. Both the Bobcats and Huskies are sporting identical 8-3 records, although NIU has the better in-conference record of 5-1.

Some observers interpret this as Paterno attempting to shield himself from civil suits stemming from Sandusky's actions. However, since Paterno is also well into his 80s and this could've been seen as a fairly benign manuever as part of an estate tax shelter of some sort were it not for the timing.