Today's Train of Thought- A Leisurely Run for the Border, Nov 14th 2011 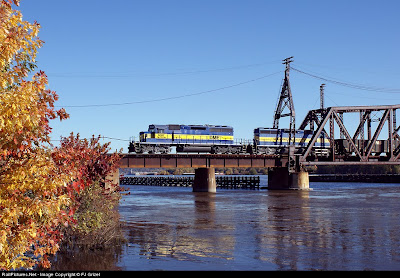 When one thinks of parts of this country that have an abundance of fall colors, one doesn't usually think of Iowa. But the northeast corner of the Hawkeye state features rolling hills and valleys as well as forests along the Mississippi River. And it's through this somewhat un-Iowa-like landscape that the former Milwaukee Road line between Minneapolis-St Paul and Kansas City traverses. There's a line to Chicago that branches off across the Mississippi river at Sabula, IA. Over the last 25 years, the line has seen no fewer than five different owners (Milwaukee Road; Soo Line; I&M Rail Link; Dakota, Minnesota & Eastern and Canadian Pacific) with the most recent change of ownership coming in 2008 when DM&E parent company Cedar American Holdings sold the combined DM&E/IC&E system to Canadian Pacific.

For the most part, CP doesn't seem to be in any particular rush to assert its corporate identity over its latest acquisition. While the blue and yellow EMDs of the IC&E and DM&E have occasionally been showing up on CP Rail's system as far east as the D&H in northern New York state, trains over this recently acquired part of the Canadian Pacific are for the most part powered by second generation standard-cab EMDs from both the IC&E/DM&E fleet as well as similar lease units.

Here, on a clear, gorgeous autumn afternoon in October 2010, railpictures.net contributor FJ Grizel caught a mixed freight decelerating after crossing the mighty Mississippi from Savanna, IL into Sabula, IA. The lead unit- SD40-2 #6367- is no stranger to these parts having started out life as Milwaukee Road #206 and having been dubbed 'City of New Ulm' by the DM&E.
Posted by Fenway_Nation at 11:03 PM