Sports Chowdah W/ A Side of Triptothan Update: No 11th Heaven For Bruins; BC Rocks Miami Like a Hurricane; The Longhorn Goobye 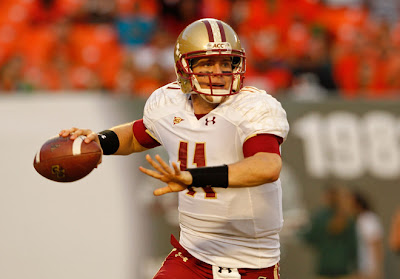 NCAA FOOTBALL: Boston College closed out the regular season on Friday with a trip to Miami to take on the struggling (altho' not as badly as the Eagles) Hurricanes.

The game seemed almost secondary to developments within the Miami program- it was decided that even if the Hurricanes were bowl-eligible that they would not accept any invitations due to an ongoing investigation and possible NCAA sanctions regarding former booster and Ponzi scheme mastermind Nevin Shapiro and the uncertainty on the status of football head coach Al Golden.

And I gotta say, despite getting out to the 14-10 halftime lead, Miami played like a team with other things on their mind in the 2nd half. Boston College got had the 1st possession of the 2nd half and after starting off on their own 20 yard line, managed to march down 80 yards in 3 minutes and 7 seconds to take a 17-14 lead on a 32 yard completion from QB Chase Rettig to TE Chris Pantale.

To open up the 4th quarter, the Eagles would get some much-needed insurance when BC linebacker Luke Kuechly picked off 'Canes QB Jackory Harris for a 45 yard return to the end zone to make it a 24-14 Boston College lead. The defense would then seal the deal by shutting down Miami's offense thanks in no small part to a number of takeaways. Harris would then go on to throw two more picks in the 4th quarter before Miami settled a late FG to make it a 24-17 game with 21 seconds left. The Hurricanes would attempt the onside kick, but it would go out of bounds to end the game and wrap up both the Eagles and Canes respective seasons.

I wish I could take credit for this quote, but an anonymous netizen who was clearly paying attention to the game said that The Canes and Jacory Harris were making Boston College look like a top tier SEC team.

Boston College finished the 2011 campaign with a 4-8 record while the Miami Hurricanes wrap things up with a 6-6 record. Apparently wanting to send the crowd home happy in Miami, it was announced that Al Golden received an 8-year contract extension with the Hurricanes with about 12 minutes remaining in the game.

I gotta say, as disappointed as I've been with Boston College this year, it was still very gratifying to seem them beat the Hurricanes and win two out of their last three. I keep thinking back to that Freese FG attempt from point-blank range that clanged off the upright against Duke in week 3 and how much different this season could've been if the kick was good. Don't get me wrong, there were a number of other issues, but that seemed to be a backbreaker way too early for BC.

This would be the first time since 1999 (back when the Eagles were still in the Big East) that the BC Eagles were ineligible for a Bowl game, so that streak comes to an end this season.

For 2012, the BC Eagles are tentatively scheduled to have Army, Northwestern, Notre Dame and Maine as non-conference opponents, although an official, finalized schedule has yet to come out.

TEXAS: Thursday night marked the end of an era in the Lone Star state when the Texas Longhorns and Texas A&M Aggies faced off for the last time in the foreseeable future thanks to the Aggies moving to the SEC starting next season. The rivalry's apparent finale was broadcast live on ESPN from Kyle stadium in College Station, TX.

The Aggies/Longhorns Rivalry dates back to 1894 and the two football teams have met each other in 118 total games since then.

The Longhorns headed into the locker room down 16-7 at the half, but started out strong in the 2nd half, with Longhorns CB Carrington Byndom picking off a pass from Aggies QB Ryan Tannehill to close within two points. Although the Aggies would keep the Longhorns out of the end zone on their next possession, they managed to take the 17-16 lead on a chip shot 25 yard FG. Texas would then pad their lead on a short TD run from RB Cody Johnson to make it 24-16 Longhorns.

But after kicking a 32 yard FG in the 4th, the Aggies would come back late to take the lead on a 16 yard completion from Tannehill to WR Jeff Fuller to make it a 25-24 Aggies lead. But with 1:48 remaining Case McCoy was able to march the Longhorns down the field and into Aggie territory, including a mad 25 yard scramble from 1st and 10 on the Aggies 48. Well within FG range, the Longhorns allowed the clock to go down to 3 seconds before bringing on Justin Tucker to kick a 40 yard FG, which sealed to 27-25 Longhorns win.

ELSEWHERE IN NCAA FOOTBALL: Pretty busy black Friday out there as far as College football went.

Despite a sloppy 1st half in Baton Rouge, the top ranked LSU Tigers came back strong in the 2nd half, blowing the #3 rated Arkansas Razorbacks out of they Bayou by a 41-17 final going on to win by a 41-17 final. Undefeated LSU will next face the #13 Georgia Bulldogs in the SEC Championship game on December 3rd.

The #8 Houston Cougars handled Tulsa pretty easily on the road 48-16 to remain undefeated heading into next weekend's Conference USA Championship game, which they will host. The undefeated Cougars will likely face either Southern Mississippi or Marshall for the title game.

Other 'rivalry' games on Friday included the West Virginia Mountaineers rallying past the Pitt Panthers, scoring 14 unanswered points in the second half to win by a 21-20 final.

NHL: After rallying past a Buffalo Sabres team determined to assert their physical presence in a shootout Wednesday night to extend their winning streak to 10 in a row, the Boston Bruins played host to the Detroit Red Wings on black Friday. 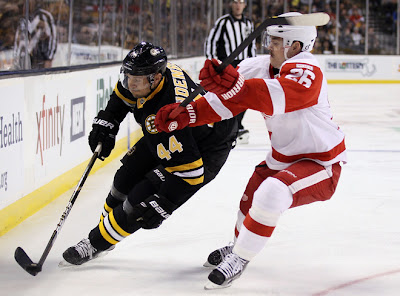 Once again, the Bruins rallied from behind to tie the game on an unassisted goal from Patrice Bergeron to tie the contest up at 2-2 and force OT. After the scoreless OT, Pavel Datsyuk and Todd Bertuzzi managed to get the puck past Tukka Rask in the OT while Nathan Horton had the lone shootout goal for Boston.

All good things must come to an end and the Red Wings snap the Bruins winning streak with their 3-2 shootout win, although Boston does get the one point for forcing the contest to overtime. This is actually the B's first shootout loss of the 2011-12 season, so at

For the first time in 16 years, the Bruins will host the Winnipeg Jets at the Garden on Saturday night. Back in November 1995, the Bruins managed to beat the Jets in regulation by a 5-4 final (and would actually sweep the season series with a 5-3 road win against Winnipeg a month later). The 9-9-4 Jets are coming off of a 3-1 at Carolina and the game gets under way at 7PM ET and will be broadcast on NESN and CBC.

NBA: Reports are circulating as of late Friday night that owners and the NBA players association have tentatively agreed to a new labor deal that would allow the regular NBA season to resume on Christmas Day.
Posted by Fenway_Nation at 9:51 PM