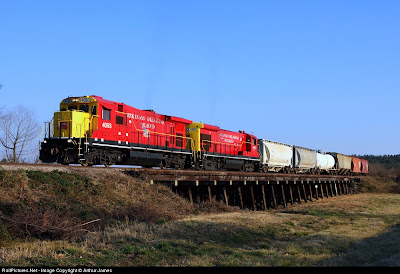 Today's train of thought takes us to the Sooner State and one of it's newer shortlines- one with a somewhat fortuitous acronym.

Between 1980 and 1996, the 73-mile stretch of former Chicago, Rock Island & Pacific tracks between McAlester to Howe, OK had no less than four parties owning or operating it- the Rock Island, the Missouri-Kansas-Texas Railway (also known as 'The Katy'), Union Pacific and the State of Oklahoma. The Katy purchased the line immediately after the Rock Island's 1980 bankruptcy and liquidation. In 1986, the State of Oklahoma purchased the line from the Katy while allowing the Katy to continue operating over it until their 1991 acquisition by Union Pacific. A similar deal with the UP remained in place until 1996, when the UP transferred all operating rights to the newly formed Arkansas-Oklahoma Railroad (the A-OK).

Interchanging with the Kansas City Southern at Howe and the UP at McAlester, the A-OK hauls wheat, frac sand, plastic, stone, gravel, pipes, coal as well as occasional carloadings of Army munitions from the McAlester Army Ammuntion Plant on the Howe-McAlester line. In 2001, the UP agreed to lease its 36-mile Shawnee branch between Oklahoma City and Shawnee, OK to the A-OK. Traffic on this separate line includes cars inbound for GM distribution facility in Midwest City, OK.

Motive power for the A-OK has been pretty varied since its inception as well. The line started off with some secondhand EMD GP series diesels and older end-cab EMD switchers before increased traffic meant the A-OK (like the Wellsboro & Corning in Pennsylvania) would need bigger and higher horsepower locomotives.

This seemed to coincide with the CSX and Norfolk Southern splitting up Conrail a decade ago- one byproduct of that was that both lines felt they had more locomotives than they needed and began selling off some of the motive power they inherited from Conrail.

And this is where the A-OK got some of it's newer diesels. At first, the A-OK wound up with about a half-dozen of the standard GE B23-7 locomotives from Conrail. This was followed by the appearance of two additional, rarer B23s....the rebuilt Super 7s built for the Monongahela Railroad more than 20 years ago. Conrail wound up acquiring them in their 1993 merger of the Monongahela, but by the time it was split between CSX and NS, Conrail, Norfolk Southern and CSX had acquired more state-of-the-art examples of GE motive power. The Super 7s were dispersed to a few shortlines and reigonals such as the Providence & Worcester, Ohio Central and Arkansas-Oklahoma.

Here, railpictures.net contributor Arthur James catches two examples of the GEs rostered by the A-OK, with rebuilt Super 7 #4093 leading unrebuilt B23-7 #4061 across a small trestle at Wister, OK on a bright February 2008 day with a small cut of cars for the Kansas City Southern interchange at Howe. The locomotives are painted in colors reminiscent of Rock Island's earlier colors (although the Rock Island never owned any Dash 7s- super or otherwise). As one commenter on railpicture.net pointed out, a casual glance seems to indicate that the A-OK takes pride in it's equipment and dedicates some effort into keeping it clean.
Posted by Fenway_Nation at 1:21 AM