Take your pick- the DL could stand for 'Disabled list' or 'Distraught Latinas'.

MLB: For the second year in a row, the Red Sox head into Independence Day with a 49-32 record. Friday night's 3-2 win over the Baltimore Orioles was probably to accommodate all the speed-daters present, since that took all of 2 hours and 7 minutes. Tim Wakefield scattered 7 hits through 8 innings of work while JD Drew had two solo homers and went 2 for 3 on the night with Daniel Nava coming on to pinch hit for Eric Patterson in the bottom of the 8th to break the 2-2 deadlock with a bloop RBI single- not as dramatic as a grand-slam in his 1st ever at bat, but just as effective.

Papelbon came on in the 9th for another 1-2-3 save opportunity, his 19th of the year.

Tonight's game wasn't as brisk, but who am I to complain about the results? Baltimore's Jeremy Guthrie lasted only four innings while giving up nine hits, six runs- including a one out 2 RBI double in the bottom of the 1st to JD Drew- and walking three while Jon Lester improved his record to 10-3 with 7 innings pitched, an earned run, three walks and seven strikeouts. JD Drew has gone 5 for 6 with 4 RBIs in the series so far. Boston wins by a 9-3 final. Game three of the series will have Brian Matusz (2-9; 4.90 ERA) start for Baltimore against Lackey (9-3; 4.46 ERA)at 1:35 PM Eastern time tomorrow.

All this comes with more additions to the DL. If losing Buchholz, Ellsbury, Lowell, Beckett and Pedroia to injury wasn't enough, Sox Captain Jason Varitek was placed on the DL with a broken left foot on July 1st. The same day 'Tek went on the DL, Boston reacquired a familiar name, C Kevin Cash from the Houston Astros in exchange for infielder Angel Sanchez. No State Police escort from the airport this time around, but Cash did a good job of backstopping Wake Friday.

MLB All-Star Game: The rosters for the 2010 American League and National League All-Stars will be announced at noon eastern time tomorrow on TBS prior to their broadcast of the Blue Jays/Yankees game. 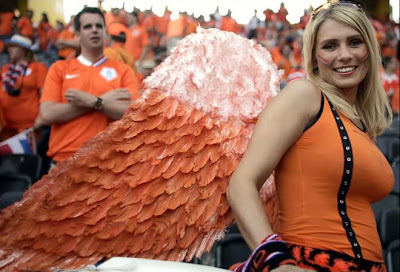 WORLD CUP: Well...stick a fork in Brazil- they're done like a churrasco after the Dutch put a wooden clog to their collective backsides...actually the game was alot closer than that, but scantily clad dames of varying nationalities and ethnicities in the stands and snarky hyperbole are typically the only things that can maintain any interest in the World Cup on my part.

Brazil got out to a quick 1-0 lead, but the equalizer came on an own-goal off the noggin of Felipe Melo and the Dutch went up for good on Wesley Sneijder's header for the 2-1 win. My offer to the sultry and no doubt dejected Brazil fanbabes fanbase via backrubs and assisting in the application of sunblock still stands, however.

In other World Cup news....wow....what a bunch of worthless douchebags Spain turned out to be. Screw you, Spain! 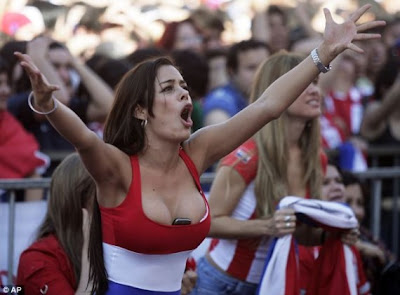 [*ring ring* You keep watching the game, Larissa- I'll get it!]

Paraguayan Lingerie model Larissa Riquelme promised to strip naked and run through the capitol city of Asuncion's main plaza should Paraguay win the World Cup (although some variations of the rumor reported she'd be wearing bodypaint in the team's colors). However, in order for that to happen, they had to get past Spain.

OK....Spain...how hard would it have been to take a dive? But nooooooo....what's his name Villa scored in the 82nd minute for the only goal of the match in Spain's 1-0 win. You better have somebody of equal or greater hotness in red & yellow paint willing to do the Lady Godiva thing (sans horse) in Plaza de de España. 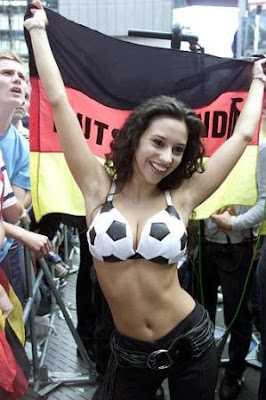 Of course, on the flip side of the coin it's not often I get to say this, but "Thank you, Germany". Apparently a similar exhibitionist wager was made by bloated, coked-up Argentina coach Diego Maradona. So it seems Maradona promised to run naked around the obelisk in the middle of Buenos Aires' Av. 9 de Julio should Argentina win the 2010 World Cup. The Germans convincing 4-0 on Saturday's rout of the Argentines meant that Maradona would not be able to make good on his threat. 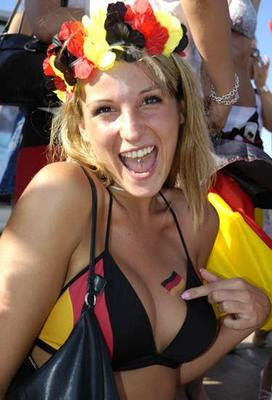 Also- Uruguay ousted Ghana in a scoreless contest that was decided by penalty kicks. Apparently this was the match that was being watched in that village in the Eastern part of Congo when a fuel tanker crashed and exploded.

So the semifinals will look something like this:
Germany vs. Spain on 7/7 from Durban
Uruguay vs The Netherlands on 7/6 from Cape Town

A new ballpark- TD Ameritrade Park- is slated to open in Omaha next to the Qwest Center in the North Downtown area of Omaha.
Posted by Fenway_Nation at 10:47 PM