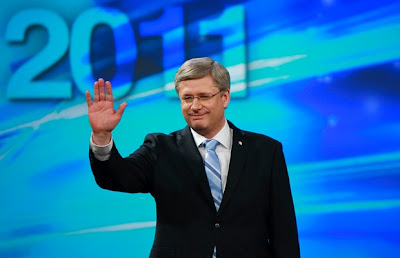 Conservative/Tory leader Stephen Harper appeared poised to have a majority government for the first time in his tenure as Canadian PM as voting took place throughout Canada on Monday.

Both the Conservatives and NDP were picking up seats everywhere from a wounded, Ignatieff-led Liberal party that lost five of its East Coast MPs and dozens of others throughout Ontario — its last major bastion of strength — and Quebec.

And the Liberals' woes were shared by Duceppe's Bloc Quebecois, which was headed for utter decimation — and perhaps as few as three seats — in the province the separatist party has long wished to lead out of Confederation.

Prior to the election, Harper's Conservative party was in the minority, with Michael Iganieff of the Liberal Party forming a coalition with the separatist Bloc Quebecois party.

The election was called for after a vote of no-confidence from the opposition MPs against Harper and his cabinet on March 26. The impasse prevented either Harper or Parliament from passing a budget for 2011. Parliament was dissolved and an election date of May 2nd was called on that week.

Another big winner in Monday's elections was the New Democrat Party and leader Jack Layton, who's party had a net gain of 66 seats, including many held by the Bloc Quebecois and Liberal Party in Quebec and Ontario. The significant gains mean that the NDP is the official Opposition party with a projected total of 102 seats.

Buoyed by skyrocketing demand for Canadian exports like oil, grain and minerals and record-high commodity prices worldwide as well as a rising Canadian dollar, Canada's recovery from the 2008 economic crisis has been more robust than elsewhere.

Personally, I would consider this good news for Canada as Harper has demonstrated pro free-enterprise leanings while in office. Initially held up by gun-control supporters in the USA as an example the country should follow, Harper campaigned on dismantling Canada's moribund long-gun registry among other issues such as increased military spending and lower taxes.

UPDATE 5/3- After viewing the non-stop petulant whinging of progressives in both the USA and Canada via Twitter who were hearing of the election results, seemt to confirm that Canada has indeed chosen well.
Posted by Fenway_Nation at 9:04 PM