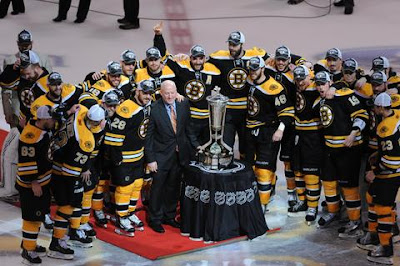 NHL: WOW! Remember when Game 7s DIDN'T live up to the hype? Didn't seem that long ago, did it?

This was such a hard series to call, with the B's shutting out the Lightning one game and allowing five unanswered goals in the next. As much as I wanted to be an insufferable douchenozzle and boldly predict a Boston win, I was genuinely uncertain about the possible outcome of the series. Both teams had eerily similar circumstances heading into the Eastern conference finals as well; finishing the regular season with 103 points, playing 7 games in the first round and then sweeping their next opponent in 4.

Credit where credit is due, Philly blogger Wyatt Earp totally called it earlier this week in the comments section. I was in denial due to Boston's fairly recent (and painful) history of Game 7 choke-itude that looked set to repeat itself as the Tampa Bay Lightning held off the Bruins to win by a 5-4 final and force a decisive Game 7 at the Garden in Boston on Friday night.

With that said, Game 7 got underway at the Garden on Friday night with the Vancouver Canucks awaiting the winner.

It seemed as though the Bruins had been peppering Lightning netminder Dwayne Roloson with shots on goal almost immediately. In fact, Roloson turned aside all 29 shots he faced in the first two periods while Tim Thomas stopped 17 shots on goal in the same timeframe to make it a scoreless game in the 3rd. After the way the first two periods had gone, it was hard to believe after the Bruins gave away a 3-0 lead in Game 4, but one was left with the feeling that whoever scored first would win Game 7.


Enter Nathan Horton, who tallied the series-winning goal in overtime of Game 7 against the Montreal Canadiens. And thanks to some superb defense and Tim Thomas between the pipes, Horton's tally would be the only goal of the evening. Thomas stopped all 24 shots he faced on Friday night while Roloson very much kept the Lightning in the contest, turning aside 37 of 38 shots faced.

The shutout is Tim Thomas' second of the series (and third career postseason shutout) while Nathan Horton's game-winner was his 8th goal of the 2011 playoffs.

The Eastern Conference champions will next take on the Vancouver Canucks for Game 1 of the Stanley Cup finals at Rogers Arena in Vancouver, BC at 8PM ET, 5PM PT on Wednesday, June 1st. The game will be broadcast on NBC.

MLB: After scoring 14 runs in back to back games (a 14-2 win to close out the series in Cleveland and a 14-1 thrashing of the Tigers to start the 4-game series at Detroit's Comerica Park), the Red Sox were held to a mere 6 runs on Friday night, with Boston getting on the board thanks to Jacoby Ellsbury coming home on a wild pitch from Tigers starter Rick Porcello in the 1st. Although Detroit would get out to a 2-1 lead, Boston would take the lead right back thanks to a huge 3rd inning that saw a solo homer from Ellsbury, a Kevin Youkilis 2-RBI double and a 2-run homer from Carl Crawford.

Venerable knuckleballer Tim Wakefield got the start for Boston and went 7 full innings, allowing two earned runs on five hits. Papelbon would give up a leadoff single to Victor Martinez in the bottom of the 9th followed by an RBI double off the bat of Jhonny Peralta, but would get the next 3 outs to close out the 6-3 Boston win.

Clay Buchholz (4-3; 3.30 ERA) will get the start for Saturday night's game while the Tigers have called up pitching prospect Andy Oliver (4-3; 3.31 ERA with the Triple-A Toledo Mud Hens this season) after starter Phil Coke went on the DL with an ankle injury earlier this week.

Granted it's not even Memorial Day, but the Red Sox have made their way into first place in the AL East with Friday night's win, one game ahead of the Yankees and a game and a half up on the Rays. Not bad after that horrendous 0-6 start that had Red Sox haters and fans alike getting ready to bury the 2011 Red Sox.
Posted by Fenway_Nation at 9:35 PM