A Cinco De Mayo Train of Though- Beauties and (High Horsepower) Beasts South of The Border, May 5 2011 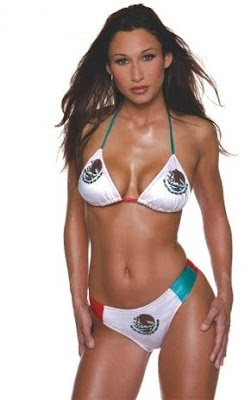 It's that time of year again- the 5th of May is an opportunity for Madison Avenue to try and sell the rest of America some marginal imported beer people to commemorate the May 5, 1862 battle outside of Puebla, Mexico where outnumbered Mexican farmers thwarted advancing French troops north of the town.

As romanticized as the tale of an underdog, poorly trained peasant army beating back a numerically superior foreign military making incursions into their country can be, there are a few common misconceptions about Cinco de Mayo and the Battle of Puebla here in the USA.

First and foremost, this is not Mexico's independence day. I'm pretty sure this topic has come up before on this blog, but I thought it would be worth revisiting. Mexico fought a decade-long war against Spain between 1810 and 1821, while the Battle of Puebla would take place some 40 years later against Napoleonic French troops. Mexico's independence day is actually observed on September 16 each year and is in fact a bigger occasion than Cinco de Mayo, which is mostly celebrated in the state of Puebla.

Second is that while the Battle of Puebla was a remarkable setback for Napoleon III's Army, French forces were able to overwhelm Mexico later on that year and install Austrian archduke Ferdinand Maximilian as Emperor Maximilian I of Mexico beginning in 1864. However, that wouldn't last very long as he was deposed by an army led by Benito Juarez in 1867 and was executed by firing squad. Puebla, the capital of Puebla state southeast of Mexico City also became home to the Mexican National Railway Museum.

Construction on Mexico's railways began shortly before the French Intervention and Battle of Puebla, with an emphasis on completing a line between Mexico City and the Gulf of Mexico port of Veracruz. Other lines radiated north out of the nation's capital, bankrolled by US, Mexican and European interests and linking the resource-rich nation with the US Border and ports along the Pacific Ocean and Gulf of Mexico. However, the network would deteriorate considerably during the Mexican revolution and be incrementally nationalized between 1929 and 1937.

It would take some 60 years for the Mexican government to follow through on privatization. In 1997, the government run Ferrocarriles Nacionales de Mexico (FNM) ceased passenger operations and was divided up. Much of the track to the north and west of Mexico City (as well as the Ferrocarril Sonora-Baja California and Chihuahua al Pacifico lines) went to Grupo Mexico's [BMV: GMEXICOB] FerroMex while the mainline between Mexico City and Nuevo Laredo to the north, Lazaro Cardeans to the South and (eventually) Veracruz to the east went to Transportes Ferroviaria Mexico, a joint venture between Mexico's Grupo TMM [NYSE: TMM] and Kansas City Southern [NYSE: KSU], although Kansas City Southern gained a majority stake in 2005 through it's KCS de Mexico subsidiary.

FerroSur, owned jointly by billionaire Carlos Slim's Grupo Carso [BMV: GCARSOA1] and Financiero Inbursa SAB [BMV: GFINBURO] would gain most of the trackage south of Mexico city, but in 2005 it would be acquired by a GrupoMexico subsidiary with the intention of merging it into FerroMex. Since this would give FerroMex a near monopoly, KCS de Mexico understandably objected and the matter was tied up in litigation until earlier this year when a tribunal from Mexico's Federal Competition Commission ruled in favor of GrupoMexico (but allowed KCS de Mexico to operate into Guadlajara via trackage rights on FerroMex).

While privatization has no doubt improved motive power, rolling stock, physical plant and right-of-way south of the border, like many other seemingly everyday activities in contemporary Mexico, railroading carries an element of risk to it.

These gangsters are armed not only with guns but heavy machinery to unload industrial materials and bulk agricultural goods, deftly passing them off to the black market.

"To unload a 30-tonne roll of steel is complicated," he said. "Not just anyone can do that and to find someone who will buy that amount is not that easy either. You have to be really well organized."

Mexico's steel chamber said robberies skyrocketed by 250 percent last year, as 12,500 tons were carted off by thieves, sometimes truck and all. Losses totaled 150 million pesos ($11 million) in 2008 and have continued as a fast clip this year.

The robberies are raising the cost of doing business in Mexico as companies hire guards, expensive security consultants and specialized satellite positioning devices to track cargo.

Using intelligence gathered from employees either intimidated or paid off to leak transport routes, the well-connected groups can hijack a truck making a pit stop, empty out the cargo and dump the driver on an abandoned road.

Gerardo Bortoni, who heads an association of truck drivers in Monclova, said the thieves hand products over to corrupt businessman while authorities turn the other way.

"They are stealing everything, coffee, cacao, pistachios. Before it was just sporadic now its very common. We're afraid to haul a lot of products," he said.

Due to the murky nature of the crimes, it is unclear who the customers are for the stolen goods but Bortoni said in the case of steel, buyers would need the capacity to process raw materials. Wholesalers say stolen food products will show up at the same markets they were taken from, just at a lower price.

Grupo Mexico, which operates Ferromex, one of Mexico's main railroads, set up a system to pay government security forces to guard their trains after a spike in thefts.

In a series of hijackings late last year, bands of dozens of people, armed sometimes with machetes and rocks, sacked entire trainloads of corn and beans.

Illegal immigrants from Central America also attempt to hop rides on freight trains on their way to try and cross the into USA. Besides the risk of injury or death from falling off the train, there's also the hazard posed by railroad and federal police demanding bribes and Mexican gangs who have demonstrated a willingness to rob, rape and murder the migrants transiting through territory they control. 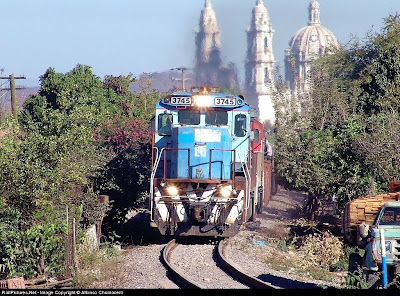 Southbound trains, however, are less likely to suffer from that problem. Here, railpictures.net contributor Alfonso Chumacero caught FerroMex C30-S7 #3745 on the point of a southbound freight chugging southbound out of the town of Acaponeta in Nayarit state on April 4, 2007 with train FXE 3745. The big 3000 HP GE on the point, a former Ferrocarriles Nacionales Mexico unit, is still wearing the faded two-tone blue of the final few years of FNM's existence. 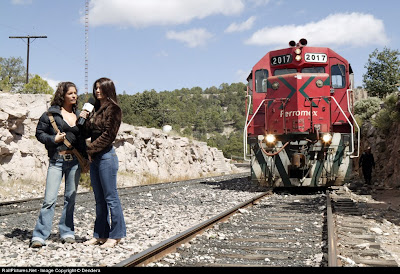 As a bonus- and to demonstrate that it's still possible to travel by train in Mexico without a peril fraught journey, there's Chihuahua al Pacifico's Copper Canyon excursions between Los Mochis, Sonora and Chihuahua. From the state capital in Chihuahua, the line actually continues north-east to the border crossing at Ojinaga/Presidio, TX and on to Alpine, TX and points north-east via FerroMex subsidiary Texas Pacifico (although the bridge across the Rio Grande was damaged by fire and knocked out of service in late 2008). The Copper Canyon segment wasn't completed until 1961 owing to the on-again off again political instability in Mexico as well as the extremely remote and difficult terrain.

Here, enigmatic Railpictures.net contributor E Hames ModelFan has caught in his lens the angular and sturdy lines of FerroMex GP38-2 #2017 in the siding with a Copper Canyon excursion train at Divisadero, Chihuahua in October 2005complimented by some enticing curves closer at hand. The two lovely women in the foreground are identified as models from Playboy Latinoamerica, reportedly preparing to film a travelogue about the Copper Canyon.

Even without the alluring latina models (who, admittedly make a good thing even better) the Chihuahua Pacifico Copper Canyon passenger train is considered one of the world's premiere railroad excursions.
Posted by Fenway_Nation at 10:47 PM