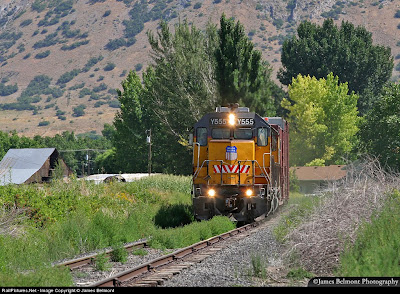 Today's train of thought brings us to a truncated remnant of the old Denver Rio Grande and Western in Utah.

Here, railpictures.net contributor James Belmont caught Union Pacific GP15-1 #Y555 (the 'Y' designates that it's normally assigned to Yard service on UP) leads another GP15-1 and a couple of boxcars as they tiptoe down the jointed rail of the former DRG&W Tintic Branch (now Union Pacific's Tintic Industrial Lead) in Springville, UT on a sunny August 2010 afternoon.

The line was built in stages between 1891 to 1896 from Springville to Eureka, UT (some 40 miles) to access the gold, silver, lead and zinc deposits of the Tintic Mining district. Although as recently as within the past decade the line had traffic from a grain elevator operated by the Church of Latter Day saints as well as limestone traffic, the line had pretty much been cut back to five miles.
Posted by Fenway_Nation at 11:36 PM