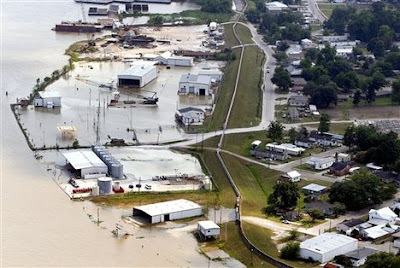 The Army corps of Engineers announced that they had opened a 16th lock on the 125-bay Morganza spillway on Wednesday, sending an estimated 108,000 cubic feet of water per second gushing through the flood control structure.

26 parishes (counties in Louisiana) have been declared disaster areas, with E. Felicicana, LaFourche, Franklin and Richland parishes being added recently. Parts of St. Martin's Parish- just east of Lafayette, LA- are under a mandatory evacuation order on Wednesday in advance of the approaching flood waters.

Further downstream (but north of New Orleans), the Corps of Engineers said they had opened up nearly 330 of the 350 bays on the Bonne Carre spillway, sending water from the Mississippi River rushing through at a rate of 316,000 cubic feet per second into Lake Pontchartrain.

To the north, the US Coast Guard had closed down the Mississippi River around Natchez, MS to shipping earlier this week over concerns about additional strain on the levees from barges and river traffic. However, the New Orleans Times-Picayune reported that the Coast Guard was allowing barges loaded with coal, timber, iron and steel to pass through at the minimum speed.

Local officials on both sides of the river from Mississippi town of Natchez breathed a sigh of relief as the Coast Guard and NOAA revised their estimate for the floodwater's crest from 63 feet down to 62 .5 feet. The crest is expected to be reached on Saturday- the previous high water mark dates back to 1937 at 58.4 feet.

Pat over at And So it Goes in Shreveport has much much more.
Posted by Fenway_Nation at 2:34 PM