Seems as though I missed all the excitement vis a vis Terry Francona and Joe West as well as Rajon Rondo's gritty performance in Game 3- well....I caught some of it on the radio, but that doesn't always effectively convey the moment. 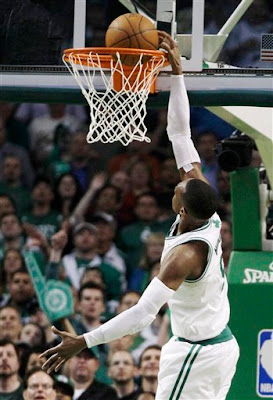 NBA: After a game 2 in the Garden on Saturday that saw Rajon Rondo playing for 38 minutes with a dislocated elbow and was capped off with a 97-81 win against the Miami Heat, the series continued on Monday night.

Rajon Rondo- unquestionably the hero of Game 3, was on the floor for 38 minutes and had 10 points, 2 rebounds and 5 assists. Paul Pierce led in scoring with 27 points, followed by Ray Allen with 17. For the Heat, LeBron James had 35 points on the night followed by Dwayne Wade with 28 and Chris Bosh with 20.

Game 5- which is do or die for Boston- is set to take place Wednesday night at Miami starting at 7PM ET, 4PM Pacific and will be broadcast on TNT.

OTHER NBA NEWS: Elsewhere, the Los Angeles Lakers season ended abruptly after being swept in 4 games by the Dallas Mavericks. Even with the C's one game away from elimination, I still find myself smiling a little bit typing that above sentence. 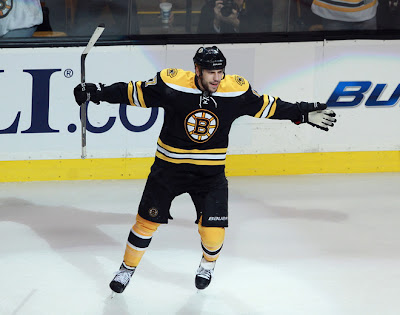 NHL: Speaking of 4-game sweeps, the Bruins ensured that there wouldn't be a repeat of last year's epic collapse by eliminating the Philadelphia Flyers to advance to the Eastern Conference finals for the first time since 1992.

Boston got on the board late in the first with a power play goal from Milan Lucic and Philly would come right back to tie it in the 2nd with an even strength goal from Kris Versteeg.

Boston would re-take the lead early in the 3rd on a Johnny Boychuck tally, but given what happened against the Flyers last year, one could be forgiven for not being convinced that a 1-goal lead late in the 3rd period was sufficient insurance. However, Lucic was able to provide some of that insurance when he managed to find the back of the net at the 15 minute mark. This was followed up by empty netters from Brad Marchand and Daniel Paille to seal the game by a 5-1 final for the Bruins, and ending the Flyers season.

Tim Thomas stopped 22 of 23 shots faced (it seemed like the overwhelming majority of them came midway through the 3rd period) while Philly's Sergei Bobrovski stopped 22 of 25 faced.

The win means that the Bruins will face the Tampa Bay Lightning in the Eastern Conference finals. Tampa is coming off their own 4-game sweep of the underwhelming Washington Capitols. Game 1 won't get underway until Saturday evening, with both (presumably well-rested) teams facing off at the Garden starting at 8PM ET.

OTHER BRUINS NEWS: Patrice Bergeron left Game 4 with what was diagnosed a 'mild' concussion after a hit from Claude Grioux and is expected to miss at least two games. Bergeron, who has a history of concussions, will be replaced by 1st round draft pick Tyler Seguin in the meantime. 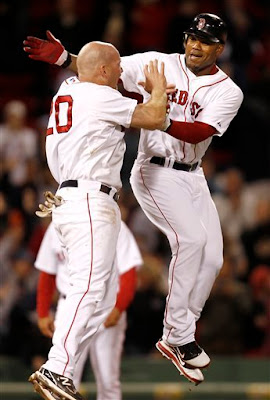 RED SOX: After splitting the home series against the Angels and dropping the 1st game to Minnesota on Friday night, the Red Sox finished up their homestand with a 3-game win streak Monday night.

Monday night's game was a little closer than I would've liked and not exactly problem free, given that Papelbon blew his a save opportunity for the 1st time this season and the Sox stranded 11 baserunners.

Adrian Gonzalez had an RBI single, driving in Varitek to make it a 1-0 game and the Sox would tenuously cling to the lead heading into the top of the 8th. With Alfredo Aceves struggling, Jonathan Papelbon came on for a 4-out save, but gave up an RBI single to Jason Kubel, driving in the speedy Denard Span to tie the game at 1-1.

Hideki Okajima gave up two hits in two shaky but scoreless innings of work for the Sox, but Jim Hoey would come on and give up an RBI single to Carl Crawford, driving in pinch-runner Jose Iglesias, giving the struggling outfielder his second walk-off hit in nearly a week.

Boston will next travel to Toronto for a brief 2-game series before travelling to the Bronx to take on the Yankees over the weekend.
Posted by Fenway_Nation at 11:58 AM