Seems as though there was some sort of technical problems with Blogger the other day where one could view the pages on any given blogger or blogspot page, but visitors could not post comments and blogmasters couldn't log in to update, edit or add new posts. After some independent tinkering, I think I managed to isolate the source of the recent problems with Blogger, as shown here:
Still, reliable sources who also maintained their blogs on blogger were telling me that posts were disappearing and they had been unable to log in since yesterday afternoon.

But what better way to offset my cluelessness than to throw down some vintage eye candy featuring a girl who looks like she knows what she's doing. 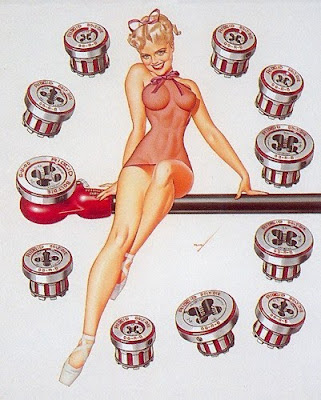 This one comes from the late George Petty and was part of the Ridge tool company's (aka Rigid) 1956 calendar. According to the Pin Up Files, one critic opined 'When you touch the wrist of a Petty girl, you almost expect to feel a pulse'.

Wrenches and lugnits are one thing, but imagine being the artist comissioned to draw up similar ads for software or IT services.