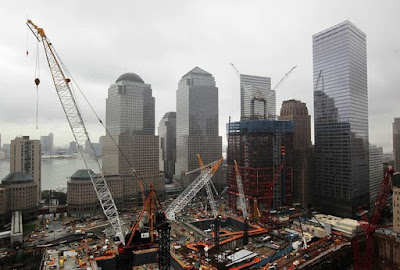 A recent report by a major New York developer's group claims that a slew of phantom no-show or no-work jobs on construction sites around Ground Zero is costing taxpayers nearly $100 million dollars.

The Real Estate Board of New York claims that rules dating back to when the International Union of Operating Engineers Locals 14 and 15 were controlled by the Colombo and Genovese crime families in the last decade. Among the affected projects are the Freedom Tower, the nearby transit hub, the 9/11 memorial and surrounding streetwork.

Contractor and union sources confirmed that the eight tower cranes at the WTC site guarantee a bonanza for Local 14 operating engineers and the Local 15 specialists who fix them.

On one day in mid-March, for example, contractors said 56 of 204 Local 14 and Local 15 employees on site held no-work jobs.

The board compiled the statistics in the runup to contract talks with the operating engineers and all the city's construction unions, which start next month.

Many of the jobs are vestiges of an era in which the Colombo and Genovese crime families controlled Locals 14 and 15. Local 14 has been under a federal monitor since 2009.

One example is the full-time Local 14 "master mechanics" the contractor must hire whenever five pieces of heavy equipment or three tower cranes are in use.

It's a ridiculous requirement, REBNY says, because the manufacturer or crane owner does the repairs, not the contractor's master mechanics.

Instead, they are glorified shop stewards, a part-time job in most unions. With three required on site a day, that should cost about $6.3 million through 2013, the board says.

Master mechanic Carl Carrara Sr., identified as a Genovese associate, was charged in a 2003 racketeering conspiracy as the mob's point man in a no-show scam at the Museum of Modern Art.

He and six other master mechanics pleaded guilty that year in two cases that put much of Local 14 and 15's leadership behind bars.

Local 15 demands a similar piece of the action via "®maintenance engineers." They're required on site full time when a master mechanic is there and three major pieces of equipment are operating in case any machines need fixing.

"There is nothing for these guys to do," a World Trade Center construction supervisor said. Eliminating that requirement would save $7.5 million over three years at Ground Zero, REBNY says.

Then there's the Local 15 position of "crane oiler," a relic from the days when equipment needed frequent lubrication. An oiler is required on site when any tower crane is in use.

Today, the oiler simply fires up the crane at the start of work. With overtime, he can earn more than $100,000 a year.

And there's Local 14's "stationary equipment operator," with one assigned to each compressor, welding machine and spray fireproofer in use. With overtime, they pull down about $110,000 a year, REBNY estimated.

A World Trade Center construction supervisor who asked not to be identified said technology has reduced the job to two simple functions: "They turn the machine on in the morning and turn it off at night," the supervisor said. "They are basically non-essential."

REBNY wants the city to loosen the union's influence over who gets licensed to operate heavy machinery.

Now, only operators with city licenses can work here, and applicants must train with city crane operators - virtually all union workers. That gives the two locals a stranglehold on major projects.

"Locals 14 and 15 have the hammer. They have the power to shut down a job," said Steven Spinola, president of REBNY, which wants to be able to hire nationally licensed crane operators.

This certainly is not the first time a union padded a contract with a number of set-aside no-show jobs in the New York area, but this has been the most contested piece of real estate within the 5 boroughs lately.

Lining their pockets with money scammed from taxpayers? Look for the Union Label!