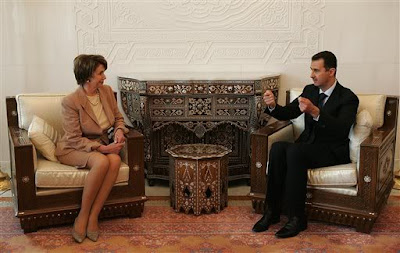 Pelosi getting pointers on governing from Bashr Al Assad, circa 2007

Still taking what's been described by some as a 'victory lap in a clown car' over the successful raid on Bin Laden's Pakistani compound, the Administration quietly announced on Friday that the Department of Health & Human Services had granted more than 200 additional waivers for HR 3590, also known as Obamacare.

The Obama administration approved 204 new waivers to Democrats’ healthcare reform law over the past month, bringing the total to 1,372.

The waivers are temporary and only apply to one provision of the law, which requires health plans to offer at least $750,000 worth of annual medical benefits before leaving patients to fend for themselves. Still, Republicans have assailed the waivers as a sign of both favoritism and of major problems with the law.

“The fact that over 1,000 waivers have been granted is a tacit admission that the healthcare law is fundamentally flawed,” Energy and Commerce Chairman Fred Upton (R-Mich.) said in March. Upton is one of three House committee chairmen who has used new oversight powers to investigate the annual limit waivers.

Of the 204 new waivers issued by HHS, at least 38 went to upscale San Francisco resturants, hotels and nightclubs in Congresswoman Pelosi's disctrict. According to the Daily Caller, this is in addition to 27 new waivers for healthcare or drug companies and 31 waivers for unions in San Francisco.

Also given a partial waiver from 0bamacare- the entire state of Nevada after it appeared as though implementation would force insurance companies doing business in the Silver State to pull up stakes and leave.

Interestingly, while Harry Reid was an ardent backer of 0bamacare in the US Senate, his son Rory Reid was running for governor of Nevada last year. Rory had claimed that the healthcare legislation could end up hurting Nevada during a gubernatorial debate in October 2010.
Posted by Fenway_Nation at 3:27 PM