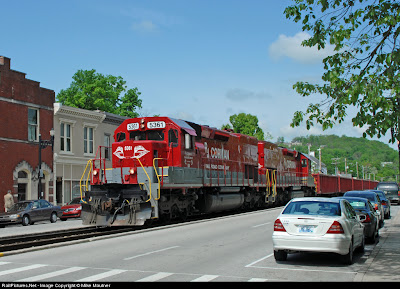 Today's train of thought comes to us from the capital of the Bluegrass State [which is NOT Louisville as some people might think- NANESB!] and features a stretch of track that's seemingly seen it all over the past decade.

Aside from the meanderings of a new genset, Chinese made steam engine or a VIP-packed Derby special, the line plays hosts to freight trains laden with limestone, corn syrup, alcohol, plastic, limestone, peanuts and fertilizer. This is on top of dedicated unit trains of aluminum ingots (made from recycled beer cans, according to the RJ Corman homepage) and sand. The sand is dredged from the Ohio River near Louisville and separated by grade before making the 80+ mile trek to Lexington, KY on the Old Road subdivision. From there, it's used locally in the construction of cement and asphalt.

Here, railpictures.net contributor Mike Mautner caught a pair of SD40T-2s RJ Corman's sharp red and silver paint scheme in charge of a loaded sand train. Here, RJCC SD40T-2 #5361 is on the point as it trundles down the middle of West Broadway St in Frankfort, KY with a loaded eastbound sand train on May 5, 2009.
Posted by Fenway_Nation at 3:51 PM