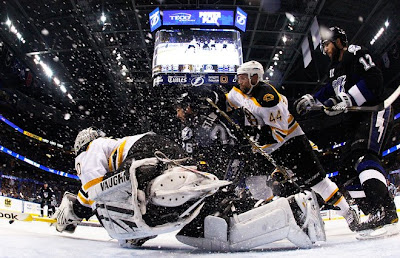 Last night was one of those nights where I consider myself fortunate to be a Boston fan, where I had to choose between the Bruins in Game 3 of the Eastern Conference Finals or the Beckett-Verlander matchup at Fenway. For those of you wondering, I ended up flipping between both.

NHL: After scoring 10 goals in the last 2 games, it only seemed like a matter of time before the Tampa Bay Lightning would manage to find their way to the back of the net during Thursday night's Game 3 of the Eastern Conference Finals. However, this would be a little different as it was Boston's turn to score first, getting out to the early 1-0 lead on a David Krejci goal one minute and 10 seconds into the 1st period.

And surprisingly, that was all the scoring that would take place in Thursday night's game up until Andrew Ference gave the B's some insurance at about the 8 minute mark of the 3rd period to make it a 2-0 game.

That would be the final as Tim Thomas stopped all 31 shots he faced from the Lightning. Dwayne Roloson stopped 23 of 2 in the losing effort on Thursday.

Patrice Bergeron returned to the lineup, getting just under 20 minutes of playing time on Thursday night while Tyler Seguin had about 13 minutes total.

Game 4 will get underway at 1:30 ET on Saturday afternoon at Tampa Bay and will be broadcast on NBC. 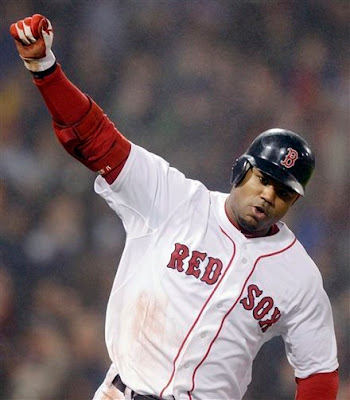 MLB: OK.....So Carl Craword is barely hitting over .200. But let is not be said that he has a flair for the dramatic.

With the matchup of Beckett and Verlander, you'd think that Thurday night's game would be the one with the 1-0 final. However, Beckett would give up a run in the top of the 2nd on an Andy Dirks RBI single and have to work out of a bases loaded jam before Boston managed to get a run of their own on a JD Drew sac fly to deep left that plated Youk in the bottom of the inning.

As the game progressed however, Justin Verlander would give up solo homers to JD Drew and David Ortiz to give the Sox a 3-1 advantage.

Beckett, however, was pulled in the 6th out of an abundance of caution on Terry Francona's part. Beckett had been compaining of neck pain earlier and with two starters already on the DL, the manager erred on the side of caution and went to the bullpen. Detroit got two back in the top of the 8th with solo homers from Brennan Boesch and Miguel bacrera to know things up at 3-3, but the Tigers were hving bullpen issues of their own when Detroit reliever Al Albuqueque loaded the bases in the bottom of the 9th with nobody out. Although he got pinch-runner Jose Iglesis out at home on a Jed Lowrie fielder's choice, that still left the bases loaded for Carl Crawford, who managed to hit it over center-fielder Austin Jackson's head for the walk-off 4-3 win.

On Firday, the Red Sox will host the Cubs at Fenway for the first time since 1918 (throwback uniforms for Saturaday's game were revaled earlier today). Doug Davis (0-1; 1.80 ERA) is expected to get the start for the Cubbies while Jon Lester (5-1; 3.28 ERA) will go for the Sox.

OTHER SOX NEWS: With Lackey and Matsuzaka on the DL and Beckett leaving Thursday's game early, it was reported the Red Sox had agreed to terms on a minor league contract with righty Kevin Millwood who had opted out of an earlier minor league deal with the NY Yankees.

On Firday, it wsa confirmed that the Sox had acquired 25 year old lefty Franklin Morales (0-1; 3.86 ERA) from the Colorado Rockies for cash or a player to be named later. To make room for Morales in the bullpen, the Red Sox designated the struggling Hideki Okajima for assignement.
Posted by Fenway_Nation at 3:31 PM