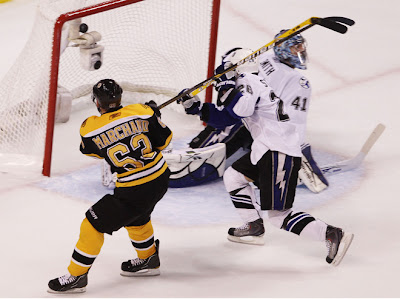 NHL: Just when you think you might have things figured out, guess again!

Unable to hold onto a pretty commanding 3-0 lead over the weekend, the Bruins went down 1-0 early against the Lightning on Monday night. Simon Gagne would get one past Tim Thomas just 1 minute and 9 seconds into the first to give Tampa the early lead. But unlike Saturday, that would be it.


Playing to a full house that included the C's Rajon Rondo and Pats head coach Bill Belichick, the Bruins would rally in the second, pulling even on Nathan Horton's even strength goal four and a half minutes into the period and taking the lead on a Brad Marchand tally around the 16 minute mark.

Tampa would furiously try and get one past Thomas in the 3rd to get the equalizer, but Thomas managed to turn aside all of them, even when starter Mike Smith was pulled for the extra attacker late in the 3rd. Rich Peverly would give the B's the breathing room they needed with all of 13 seconds remaining in regulation after scoring an empty-netter.

Dwayne Roloson did not get the start in net Monday- Lighting head coach Guy Boucher went with Mike Smith between the pipes. Over the weekend, Smith did not allow a goal after Roloson had given up three in the 1st period. However, on Monday Smith allowed two goals on 19 shots while Tim Thomas turned aside all but one of the 34 shots he faced.

The Bruins win Monday night by a 3-1 final and lead the series 3 games to 2. The Eastern Conference finals shifts back to Florida for Wednesday night, with a 8PM ET puck drop- the game will be televised on VS and the CBC.

WESTERN CONFERENCE FINALS: The Bruins or Lightning now know who they'll be going up against once the Eastern Conference finals are wrapped up.

It might've taken double OT on Tuesday night to secure the series win against the San Jose Sharks, but the Vancouver Canucks needed all of five games to advance to the Stanley Cup finals after winning the Western Conference finals 3 games to 1.

Kevin Bieksa scored a wobbly knuckler 10 minutes into the second OT in Vancouver Tuesday night to send the Canucks to the Stanley Cup finals for the first time since 1994.

ELSEWHERE IN THE NHL: The Hennepin County Medical examiner's office released a report that NY Rangers enforcer Derek Boogaard died from an accidental mix of alcohol and the painkiller oxycodone. Boogaard was a few months shy of his 29th birthday at the time of his May 13th death and had his season ended b a concussion earlier this year. 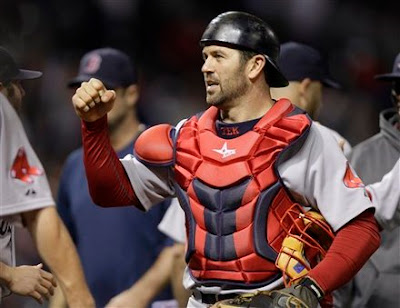 MLB: After getting 7 and ⅓ innings from Clay Buccholz Monday night, the Red Sox bullpen could not manage to hold onto a 2-1 lead, giving up 2 runs in the bottom of the 8th. Although JD Drew and Jed Lowrie would get 1-out singles in the top of the 9th, the game ended when OF Carl Crawford grounded into a double-play.

Tuesday night featured a matchup between Josh Beckett and Fausto Carmona that was a little more reminiscent of the 2007 ALCS.

Although the Tribe would get on the board first with an RBI single from OF Ezequiel Carrera in the bottom of the 2nd, the Red Sox would take the lead in the top of the 3rd and then add to it in the top of the 7th after Big Papi led off the inning with a double and Jason Varitek hit a 1-out homer to right field to make it 4-1.

Cleveland would get a run back in the bottom of the 9th thanks to a 1-out Travis Buck solo homer off of Papelbon. 1B Matt LaPorta belted another Papelbon offering pretty deep to left, but that ended up being out #3 and the Red Sox hang on to win by a final of 4-2.