UPDATE 5/24: A badly injured 8 year old boy was pulled alive from wreckage by rescue workers nearly two days after the massive tornado ripped through the area.

However, as many as 1500 people in and around Joplin are still unaccounted for. 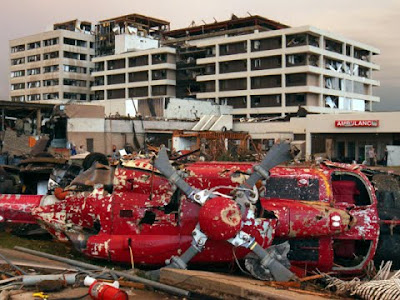 At least 116 people were killed and an unknown number injured Sunday evening when a massive tornado tore through the southwestern Missouri city of Joplin. Missouri governor Jay Nixon declared a state of emergency and activated the National Guard in the aftermath of the tornado.

The tornado touched down at about 5:30 PM CT on Sunday and made its way east through the city, narrowly missing downtown Joplin but heavily damaging St. John's Regional Medical Center and destroying many houses and businesses on the south side of Joplin as well (St. John's had to be evacuated an hour and a half later).

It was the deadliest single twister in the U.S. in nearly 60 years and the second major tornado disaster in less than a month.

Authorities feared the toll could rise as the full scope of the destruction comes into view: house after house reduced to slabs, cars crushed like soda cans, shaken residents roaming streets in search of missing family members. And the danger was by no means over. Fires from gas leaks burned across town, and more violent weather loomed, including the threat of hail, high winds and even more tornadoes.

At daybreak, the city's south side emerged from darkness as a barren, smoky wasteland.

Some of the most startling damage was at St. John's Regional Medical Center, where staff had only moments to hustle their patients into the hallway. Six people died there, five of them patients, plus one visitor.

The storm blew out hundreds of windows and caused damage so extensive that doctors had to abandon the hospital soon after the twister passed. A crumpled helicopter lay on its side in the parking lot near a single twisted mass of metal that used to be cars.

Dr. Jim Riscoe said some members of his emergency room staff showed up after the tornado with injuries of their own, but they worked through the night anyway.

"I spent most of my life at that hospital," Riscoe said at a triage center at Joplin's Memorial Hall entertainment venue. "It's awful. I had two pregnant nurses who dove under gurneys ... It's a testimony to the human spirit."

While many residents had up to 17 minutes of warning, rain and hail may have drowned out the sirens.

As rescuers toiled in the debris, a strong thunderstorm lashed the crippled city. Rescue crews had to move gingerly around downed power lines and jagged chunks of debris as they hunted for victims and hoped for survivors. Fires, gas fumes and unstable buildings posed constant threats.

Teams of searchers fanned out in waves across several square miles (kilometers). The groups went door to door, making quick checks of property that in many places had been stripped to their foundations or had walls collapse.

National Weather Service Director Jack Hayes said the storm was given a preliminary label as an EF4 -- the second-highest rating assigned to twisters based on the damage they cause.

Unlike last months deadly outbreak of tornadoes in the South, the devastation in Joplin was wrought by a single, massive tornado thought the be at least a three quarters of a mile wide according to some witnesses. 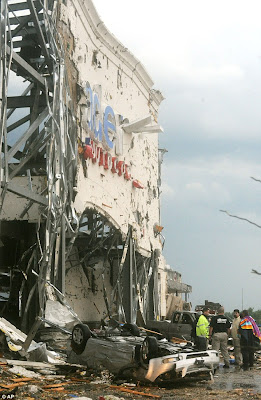 Unfortunately, many officials are expecting the death toll to rise as rescuers in the area will have to deal with more storms throughout the week as forecasters are warning of more severe weather in Missouri, Kansas, Oklahoma and Arkansas.

Once a key zinc mining center, Joplin currently is a transportation crossroads with the Kansas City Southern, BNSF and Rail America's Missouri & North Arkansas each serving the city of 50,000 via railroad. For much of the 20th Century, the famed Route 66 passed through Joplin on its way between Chicago and California. Presently, I-44 passes through the city between St. Louis and Tulsa (and onto Oklahoma City and Texas) while US 71, which runs north-south through Joplin on its way between the Ozarks and Kansas City is close to being brought up to interstate standards.
Posted by Fenway_Nation at 2:32 PM