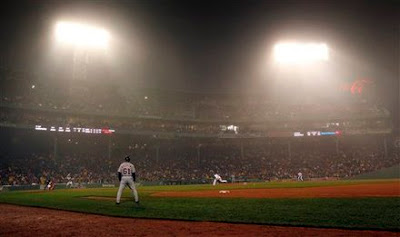 RED SOX: As it turned out, Tuesday night's home game against Baltimore was rained out, so those of us interested in seeing how Wakefield would fare as a starter this season would have to wait a little longer.

On Wednesday night, it looked as though the weather would continue to play havoc with Boston's schedule a fairly dense fog moved into the area before the ballpark was hit with a deluge late in the scoreless game against the Detroit Tigers. The grounds crew rolled out the tarp in the top of the 8th, but barely a half hour later the game resumed. After relieving starter Clay Buccholz, Daniel Bard threw exactly one pitch before the game was suspended but came right back out and retired the side in order.

Carl Crawford managed a 2-out walk in the bottom of the 8th and went from 1st to home when Jarrod Saltalamacchia hit a double to left center to score the game's only run. Like the weather, Papelbon's 9th wasn't pretty but it was good enough for the save in the 1-0 game.

Buccholz threw a career high 127 pitches in 7 innings of work while Detroit starter Phil Coke (who hadn't allowed a Red Sox batter past first base) needed only 78 pitches for as many innings.

Thursday night's game has all the makings of a pitcher's duel as Josh Beckett (3-1; 1.75 ERA) goes up against Detroit's Justin Verlander (4-3; 2.91 ERA) who no-hit the Toronto Blue Jays earlier this month for his second career no-hitter.

OTHER RED SOX NEWS: Daisuke Matsuzaka went on the 15-day DL this week with what Red Sox medical staff are calling a sprained elbow ligament. The Japanese right-hander will be re-examined after 2 weeks and could miss up to a month. 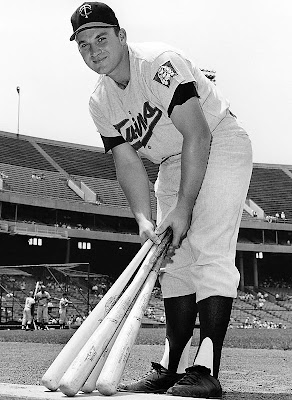 ELSEWHERE IN MLB: One of the first-ever Minnestoa Twins, hall-of-Famer Harmon Killebrew, passed away from esophegeal cancer at his home in Scottsdale, AZ on Tuesday. The 74 year old was born in Payette, ID and was said to have built up his strength by hauling around paint and 10 gallon pails of mils on the family farm in Idaho.

Killebrew is 11th on baseball's all-time home run list and was inducted into the Baseball Hall of fame in 1984 some 10 years after calling it a career.

The Twins will hold a public memorial at Target Field on May 26, while a public service will be held in Peoria, AZ on Friday. Killebrew will reportedly be laid to rest in his Idaho hometown in a private service on May 23rd. 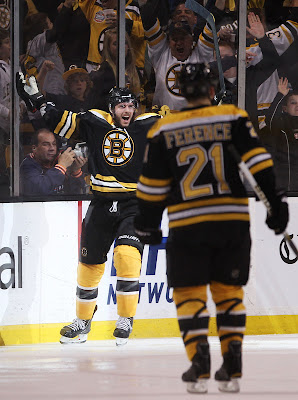 BOSTON BRUINS: Tuesday night's game started off with that sinking 'uh-oh!' feeling for Bruins fans when the Tampa Bay Lightning got one past Tim Thomas 13 seconds into the game for the quick 1-0 lead. The Lightning would head off to the 1st intermission holding a 2-1 lead, with Nathan Horton getting a rare power play goal for Boston.

However, the second period saw Boston rally thanks in large part to a pair of goals from first round draft pick Tyler Seguin, who notched the game-tying tally not even 50 seconds in. David Krejci would put the B's up 3-2 while Seguin managed to add to the lead with his 2nd goal of the night some 4 minutes later. Vinny LeCalvier would then score to bring the Lightning back within 1 goal, but Micheal Ryder would notch an even strength goal at the 16:16 mark and a power play goal with 19 seconds left in the 2nd to make it a 6-3 game.

Although playing with a lead was still something new and novel for the Bruins in the Eastern conference, it was starting to look as though that 3 goal lead might not be enough in the third when Steven Stamkos and Dominic Moore managed to score for the Lightning to make it a 1-goal game. However, the Bruins would hang on to win by a final of 6-5. However, the Bruins were able to run off the clock and hang on to win by the 6-5 final, evening up the Eastern conference finals at 1-1.

Tim Thomas stopped 36 of 41 shots faced while Dwayne Roloson was yanked after allowing the 6th goal. With Patrice Bergeron out of the lineup, Tyler Seguin stepped in and had 2 goals and 2 assists while Micheal Ryder had 2 goals and an assist.

As many other NHL observers have pointed out, this creates something of a dilemma for when Patrice Bereron is ready to come back- do you continue riding the hot hand in Seguin, or go with the veteran? Good problem to have, at least...

The series resumes on Thursday night at the St Pete Times Forum in Tampa, FL. The game will be carried on VS and gets underway a 8:00 PM ET. 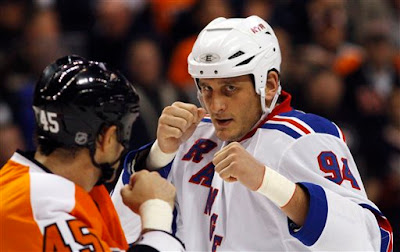 ELSEWHERE IN THE NHL: 28 year old NY Rangers enforcer Derek Boogaard was found dead in his Minneapolis apartment over the weekend. Boogaard had sustained a season-ending concussion a few months earlier. A cause of death has yet to be determined, as the results for an autopsy are expected to take two more weeks.

BOSTON CELTICS: Head coach Doc Rivers travelled to Florida to undergo surgery, returning to Boston on Tuesday. The team said that the operation was to remove a benign polyp from Rivers' throat and that doctors have declared him cancer free.
Posted by Fenway_Nation at 10:43 PM