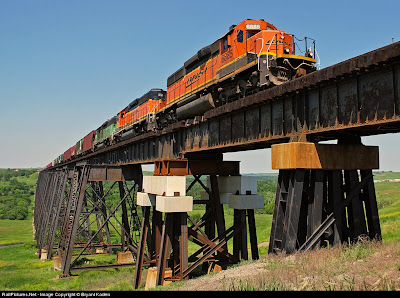 Today's train of thought brings us to an impressive span in a state that is synonymous with 'flat'. About 60 miles west of Fargo, the town of Valley City, ND also goes by the moniker 'city of bridges'.

In addition to the smaller vehicle and footbridges closer to the town center that span the winding Sheyenne River, there's the soaring former Northern Pacific Hi-Line bridge north of town. The 103 year old structure is more than 3800 feet long and 162 feet high and was built by the Northern Pacific to bypass the steep grades in and out of the valley on it's Twin Cities-Seattle mainline. In the course of traversing the valley, the bridge (now BNSF's) crosses a county highway, the Sheyenne River and the Carrington Subdivision on Canadian Pacific's former Soo Line route between the Twin Cities and the Canadian border at Portal, ND.

Above, railpictures.net contributor Bryant Kaden caught BNSF SD40-2 #6885 leading an eastbound Jamestown, ND to Fargo, ND local freight as the 2nd generation EMD locomotives come off the eastern end of the trestle on June 10, 2010. The CP Rail's Carrington Subdivision is just visible in the bottom left of the image. 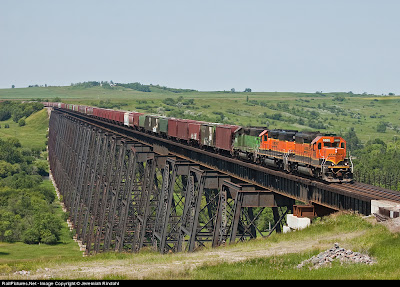 As a bonus, railpictures.net contributor Jerimiah Rindahl caught the same train at the same time from a slightly different location, offering an even more panoramic view of the surrounding countryside.

I'll let you compare and contrast the two images and see which one you find more appealing.
Posted by Fenway_Nation at 11:44 PM