This has been coming in pretty rapid fire (pardon the expression) all night, and it's been difficult to keep up with the various reports and rumors that have been going on.

In an unscheduled news conference from the East Room of the White House earlier tonight, President Obama announced that fugitive al Qaeda leader Osama Bin Laden was killed in a Navy SEAL raid on a mansion in northern Pakistan. 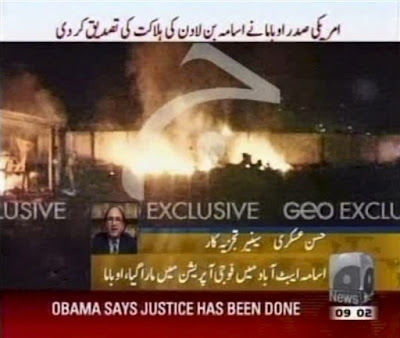 Unlike previous strikes over Pakistan, this reportedly involved a prolonged firefight between helicopter-borne SEALs and Bin Laden along with his couriers and one of his sons at a compound in the city of Abbotabad, some 30 miles from the Pakistani capitol of Islamabad and less than 5 miles away from the Pakistani Military Academy in Kakul.

The U.S. had been monitoring the compound in Abbottabad for months after receiving a tip in August that Bin Laden might be seeking shelter there. He had long been said to be in the mountainous region along the Afghanistan, Pakistan border, hiding in a cave as the U.S. sought to kill him with drone strikes from above. Instead, he was in a house eight times larger than its neighbors, with a seven-foot wall and valued at $1 million. The house had no phone or television and the residents burned their trash. The house had high windows and few points of access, and U.S. officials concluded it had been built to hide someone.

According to U.S. officials, two U.S. helicopters swept into the compound at 1:30 and 2:00 a.m. Sunday morning. Twenty to 25 U.S. Navy Seals under the command of the Joint Special Operations Command in cooperation with the CIA stormed the compound and engaged Bin Laden and his men in a firefight, killed Bin Laden and all those with him.

Two Bin Laden couriers were killed, as was one of Osama Bin Laden's son, as was a woman reportedly used as a shield by one of the men. Other women and children were present in the compound, according to Pakistani officials, but were not harmed. U.S. officials said that Bin Laden himself did fire his weapon during the fight.

One of the U.S. helicopters was damaged but not destroyed during the operation, and U.S. forces elected to destroy it themselves with explosives.

The Americans took Bin Laden's body into custody after the firefight and confirmed his identity. According to a senior administration official, the U.S. is "ensuring it is handled in accordance with Islamic practice and tradition. It's something we take seriously and therefore it's being handled in an appropriate manner."

According to Pakistani officials, the operation was a joint U.S.-Pakistani operation, but U.S. officials said only U.S. personnel were involved in the raid. 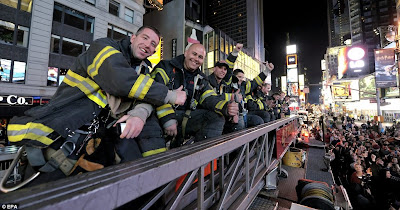 News of the September 11, 2001 terrorist attack mastermind's demise was greeted with cheers by crowds in front of the White House in Washington DC and in Times Square and adjacent to Ground Zero in New York City. Among the celebrants were members of the FDNY and NYPD- 343 Firefighters and 60 police officers were among the first responders killed in the 9/11 attacks.

So as it turns out, it wasn't a drone strike like many had predicted (on the assumption Bin Laden was even still alive) or porcine-induced rectal trauma like I had really really hoped he would have inflicted on him in his final hours, but if confirmed then this is good news indeed.

UPDATE: Multiple outlets are reporting that this op has been in the works since 2007.

The operation had been in the works for years. Since 9/11, the CIA gathered leads on those in bin Laden’s inner circle, including personal couriers. During interrogations and questioning, various detainees flagged individuals who may have been providing support to OBL and Zawahiri. One courier in particularly was identified by detainees as one of the few al Qaeda couriers who had bin Laden’s trust. He was identified as a “protégé” of Khalid Sheikh Mohammad and a trusted assistant of Abu Faraj al –Libbi, the former #3 of al Qaeda, who was captured in 2005. There were even indications the courier may have been living with bin Laden.

In August 2010 came a big break. Intelligence identified a compound that aroused their suspicion – eight times larger than other homes in the area, built in 2005, on a property valued at $1 million. But access to the compound was severely restricted, with elaborate security and 12 to 18 foot walls topped with barbed wire. Incongruently, the compound has no phone service or televisions. The main building had few windows and a seven foot wall for privacy. Residents burned their trash.

Intelligence officials concluded that unit was “custom built” to hide someone. A third family was identified as living there – and the size and makeup matched the bin Laden family members most likely with him. The location and design of compound were consistent with what experts expected his hideout might look like. Their final conclusion: there was a strong probability that this was bin Laden’s hideout.

Personally, I think it would be kinda cute if we could plant a couple hundred thousand in cash in the form of Euros or US Dollars on a couple of the remaining Al Qaeda higher ups, bundled with little strips that would have a cryptic message in Arabic or Urdu about a 'job well done', only to have the cash discovered by subordinates.
Posted by Fenway_Nation at 9:55 PM