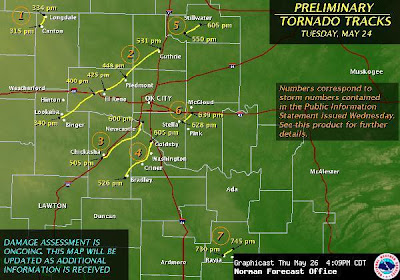 Just days after a massive F5 tornado ripped through downtown Joplin, MO at least a half dozen tornadoes carved a swath of destruction throughout northern and central Oklahoma.

While not as severe or deadly as Sunday's Joplin F5 twister or the outbreak of storms that hit the South last month, at least 10 people were killed making it the deadliest in the state since an F5 struck suburban Oklahoma City in May 1999, killing 50. 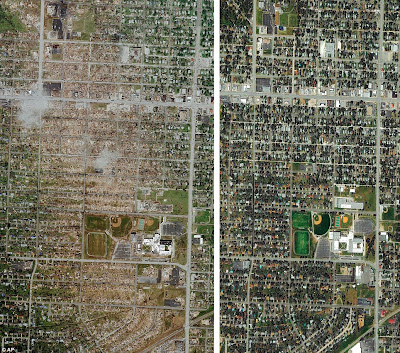 Side by side satellite images of Joplin, MO before and after F5 tornado- AP

However, rescue workers are still searching for at least 232 people still unaccounted for since Sunday's disaster and the death toll had been revised up to 125. Nearly half of the missing are said to be seniors.

For those interested in making any kind of donation towards disaster relief in Southwestern Missouri, more information can be found at the Heart of Missouri United Way, Ozark Food Harvest or Convoy of Hope. The Springfield, MO News-Leader also has a directory of regional and national relief organizations listed on their website.
Posted by Fenway_Nation at 9:20 PM