UPDATED 5/15: US Army Corps of Engineers Opens Up Massive Floodgates Along Mississippi River

UPDATE 5/15: Although residing in a part of Louisiana relatively unaffected by the Morganza floodwall being opened up, blogger Pat Austin of And So it Goes in Shreveport has been updating frequently througout the weekend.

Louisiana reigonal news aggregator The Dead Pelican also came reccomended by a trusted source during the Deepwater Horizon spill last year and should have ample links to local coverage around Baton Rouge and the Morganza floodway.


For the first time in nearly 40 years, the Army Corps of Engineers opened up the first of the 125 massive floodgates of the Morganza spillway to relive pressure on a number of older downriver flood control structures protecting Baton Rouge and New Orleans from a swollen Mississippi River. 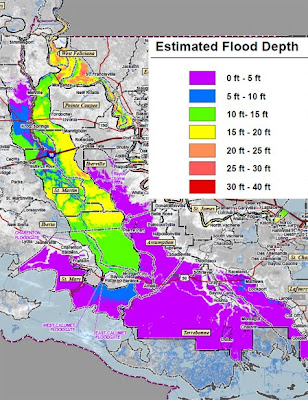 The decision to open up the spillway to protect New Orleans and Baton Rouge means that towns throughout the Atchafalaya Basin west of Baton Rouge are bracing for rising floodwaters, with some communities and businesses getting ready to evacuate or erect levees of their own. Elsewhere in the basin, farmers have been working around the clock to harvest their wheat crop before the rising waters from the Morganza Flood wall. There are an estimated 15,256 acres of farmland throughout the basin and another 2,853 acres located in the fore bay area between the floodwall and Mississippi River.

While farmers would be able to harvest some of the wheat, other crops in the basin such as corn, soybeans, sugarcane and rice would be considered a complete writeoff in the floods.

For the past two weeks, the Mississppi River had crested past flood levels as two major storm systems dumped considerable rainfall on the Mississippi and Missouri River headwaters in addition to the melting snow.

Earlier this month, the Army Corps of Engineers blew up an earthen levee in Sikeston, MO to prevent further damage to the town of Cairo, IL. Since then, floodwaters have struck western Kentucky and Tennessee (including Memphis) and Mississippi, surpassing record flood levels set back during 1937.
Posted by Fenway_Nation at 11:11 PM