I'll let you in on a secret, NANESB! readers. Brazil is the only country I've had the dubious distinction of being kicked out of. Oh sure, my last night in Australia was spent in a jail cell but I was welcome to stay afterwards if I could just stay out of trouble didn't already have a flight to catch.

My ejection from Brazil was actually under far more mundane circumstances. You see, even if one is transiting through a tiny corner of the world's 5th largest country, Americans require a visa to enter Brazil. And that was the case about a decade ago when I was travelling through eastern Paraguay to the Argentine side of Iguazu Falls. Since the Argentine peso was pegged to the US dollar at an artificial 1:1 ratio at the time, that made Argentina an expensive place to visit and I decided to stock up on supplies at the border town of Ciudad Del Este, Paraguay (before it became a Latin American stronghold for Hezbollah, apparently). I naively figured I could just walk across the Ponte da Amizade into Brazil and continue on from there.

Not so fast, said the Brazilian customs guy on the other side. American passport holders required a visa, even if they were just transiting through. And with that, I was politely (but firmly) asked to return across the bridge. The Paraguayan official that put the exit stamp in my passport was a little surprised to see me come back so quickly. When I told him what happened, he seemed at something of a loss since the Brazilian consulate on that side of the border was closed for the holiday and couldn't issue a visa- and they don't issue visas at the border crossings themselves, either. But then he rather helpfully pointed out that if I wanted to go to the Argentine side of Iguazu falls, there was a special bus with a turnstile (separating the passengers who were heading from Argentina from the ones who were getting off in Brazil) that went from Ciudad Este to Foz do Iguaçu on the Brazilian side and then onto Puerto Iguazu on the Argentine side. So after waiting about an hour, the bus he was telling me about showed up and I got on, walked through the turnstile that separated the front from the back and was able to transit through Foz do Iguaçu (not exactly a 'must-see' city in and of itself) and ushered off only when it was time to pass through Argentina's customs. 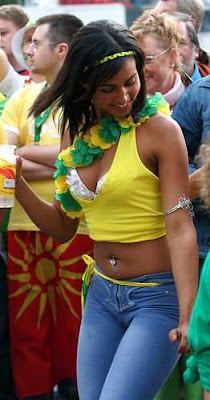 However inconvenient it was, the experience didn't put me off of Brazil completely. I understand the scenery elsewhere in Brazil is nothing short of breathtaking and warrants a future visit from yours truly. 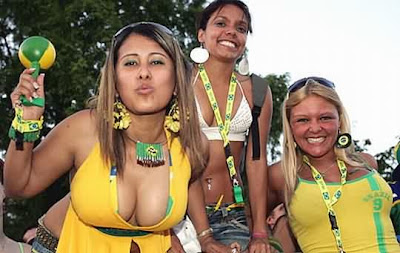 Also- to be honest- I thought for sure Brazil would advance to the finals of the World Cup this year and I would have ample opportunity to toss out some sweet sweet green & yellow clad ocular candy between now and the final. While there is no shortage of attractive Brazilian soccer fans, they all must be pretty bummed at (what they view as) Brazil's early exit from the 2010 World Cup. 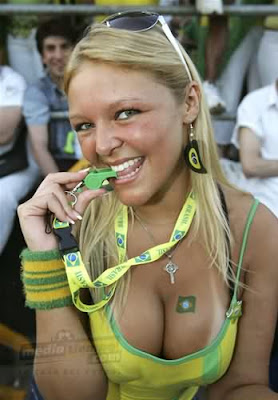 With that said, any dejected female fans of Brazil who need some in-depth counselling and maybe a therapeutic backrub or thorough application of various scented suntan lotions are more than welcome to get a hold of me via this blog. 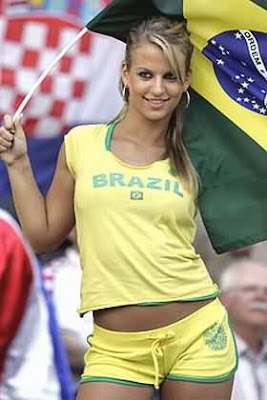 But then again, Brazil IS hosting the 2014 FIFA world cup and the 2016 Summer Olympics, so it's not as though there's nothing for them to look forward to. Whereas we here in the USA haven't really arrived as a 'serious' soccer nation because of our marked lack of soccer-related rioting. 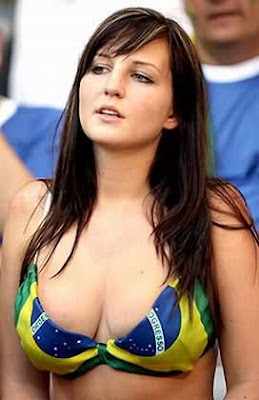 See? Things are looking up already!

I know....most of you are probably griping 'Enough with the attractive women barely concealed by various patchwork snippets of the Brazilian flag already- where are the trains?' Today's very roundabout Train of Though is to highlight the railways in Brazil. Like many a Latin American nation, they decided to privatize their railway network over the last 20 years.
The railway network generally is centered around the east of the country and didn't lend itself particularly well to passenger travel even when the state was willing to undertake such an endeavor.

Like the USA, freight rules supreme on Brazil's contemporary railway network, linking mines in the mineral-rich interior with the ports throughout the country. Such an example can be seen in this 330 car loaded ore train filmed in the state of Maranhão on the Estrada de Ferro Carajás by the crew member of another train waiting in the siding- this one of the railways in northeastern Brazil controlled by Companhia Vale do Rio Doce [NYSE: VALE]. The locomotives powering this behemoth of a train (which is nothing unusual on Vale's Brazilian lines) are all American- a mix of SD70MACs, C44-9Ws, C30-7s and an SD40-2 dispersed throughout the train. Over the last decade, Vale invested US$1.3 billion on it's Brazilian railroad infrastructure alone- the mining company has nearly 9000 km of track in Brazil. 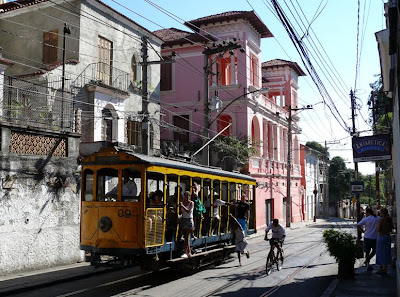 With privatization comes modernization as well, although some have taken to preserving lines and rolling stock like the Santa Theresa Bonde in Rio De Janerio. There's also a burgeoning rail preservation movement in other parts of Brazil.

The lion's share of the freight-hauling seems to be divided among Vale and companies like ALL Logistica and MRS Logistica. 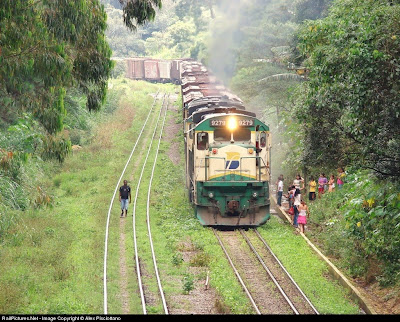 Here, railpictures.net contributor Alex Pisciottano shows us that trains will sometimes draw a crowd in Brazil as well, as Brasil Ferrovias C30-7 9279 tiptoes down some dual gauge trackage in Canguera, Sao Paulo state on an overcast March 22, 2008. Brasil Ferrovias was taken over by ALL Logisitca in 2006 and has been operating as a subsidiary since then. 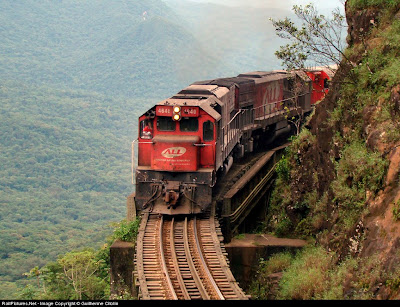 It's also worth mentioning that ALL Logitisca operates the scenic Curitiba to Paranagua line in Brazil's southeastern Parana state. Besides revenue freight to and from the busy port of Paranagua, there is also a Budd-powered excursion between the two cities called the Serra Verde express. Here, railpictures.net contributor Guilherme Citolin caught ALL Logisitca G22-C (an EMD Export model) clinging to the mountainside at Morretes, Parana on its long climb up from Parana- also in March 2008.

So cheer up, Brazil. Not only is your railway network- and by extension, your economy- humming along (thanks in large part to American locomotives purchased new and secondhand from the USA, Canada and even Namibia), but you could be getting a high-speed rail line between Sao Paulo and Rio in time for the 2014 World Cup. Heck- even George Soros has taken a shine to Petrobras.

So chin up, all you you bandeira-brandishing Brazilian beauties....after all- it's just a game. 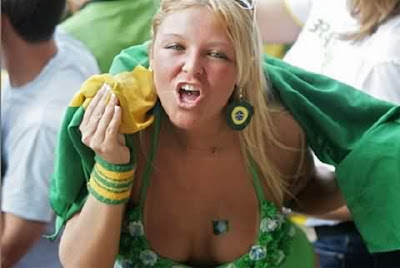 Posted by Fenway_Nation at 4:42 AM