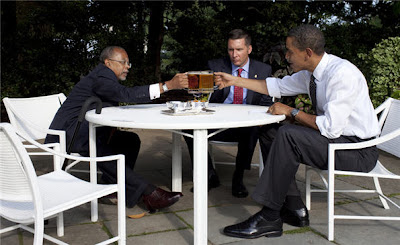 Today marks the one year anniversary of the highly contrived White House Beer Summit, a meeting where Harvard Professor Skip Gates, Cambridge MA Sgt. James Crowley and President Obama all got together at the White House for a beer to resolve whatever lingering animosity following Professor Gates' July 16, 2009 arrest for disorderly conduct at his Cambridge, MA residence and the President's ignorant and ill-advised comments basically calling the Cambridge Police officer a stupid racist.
Theoretically that argument would've flown if it was some hotheaded rookie who simply felt like throwing his weight around and being a dick, but Sgt. James Crowley's credentials were very impressive- so much so that he was selected by a black police commissioner as an instructor on avoiding racial profiling at the Lowell, MA police academy and as a campus police officer had tried unsuccessfully reviving the Celtics' Reggie Lewis after suffering a fatal heart attack on the campus of Brandeis University in 1993.

When it became clear that President Obama stepped in a big steaming cowpie by speaking up in defence of one of his Ivy-league friends before -by his own admission- he had all the facts, Obama's supporters in the media tried establishing the narrative that whoever called 911 was in fact the true racist.

As it turns out, the 911 call was placed by Lucia Whalen, who saw two men forcing their way into Gates' residence from a distance and- when prompted by the dispatcher- couldn't describe them by ethnicity or skin color, and in fact said that it could be nothing more than the homeowners having a difficult time with the keys.

According to the arrest report, when Sgt. Crowey and another officer arrived at the house told Gates that he was responding to a reported break-in Gates simply yelled back "Why? Because I'm a black man in America?" before eventually producing a Harvard ID. Despite claiming in a July 21, 2009 interview in The Root that he was incapable of yelling due to a bronchial infection. Gates is heard yelling in the background numerous times in Sgt Crowley's radio transmissions with the dispatcher. Gates the reportedly followed Crowley outside, still yelling and apparently pulling some race-baiting diva 'Do you know who I am?' crap at which point he was arrested for disorderly conduct before being released later that night.

Despite criticism from the Mayor of Cambridge, Gov. Patrick and President Obama, Crowley refused to apologize. Sgt. Leon Lashley, a black Cambridge police officer who was on the scene, said he supported Crowley's actions '100%' and felt the encounter would've gone differently if he was the one to show up first and ask Gates for his ID. Many of Cambridge's officers publicly came out in support of Crowley immediately after Obama's 'acted stupidly' comment, including several black patrolmen and detectives on the force.

In an attempt to spin his gaffe as a 'teachable moment', Obama offered to 'mediate' the dispute by inviting both Gates and Sgt. Crowley to the White House for some beers. The meeting- known as the 'Beer Summit' took place on July 30th 2009.

And from that day forward, there was no more racial division in America. That one moment healed centuries of tensions and ill-will in this land of ours, and 'Civil Rights' groups and liberal journalists no longer used racism as a club with which they would beat over the heads of political foes. Nosiree....the days of baseless accusations of racism being hurled about by various groups had long since passed. And we all have the beer summit to thank for that, courtesy of our first-EVAH 'post-racial' president.

Or at least that's how the hacks at the MSM and Journo-list were spinning this dog and pony show one year ago. At the time, I remember thinking 'If the president got it wrong on a matter that would hardly make the police blotter of a small-town newspaper, why should I believe he'll get it right on more critical issues on national significance?'. His response to the Deepwater Horizon spill, Fort Hood shootings, attempted Christmas day bombing of the Northwest Airlines flight over Detroit, the attempted Times Square bombing and the deteriorating situation along the US/Mexican border seems to reinforce this.

To Henry Gates' credit, he penned an op-ed piece earlier this year explaining why reparations for slavery would be untenable given the considerable participation of African tribes in the slave trade.
Posted by Fenway_Nation at 1:45 AM