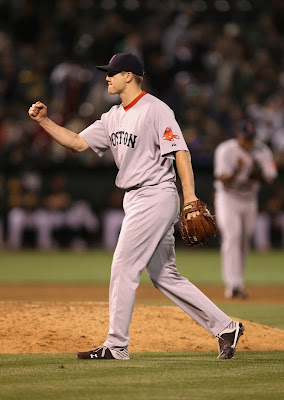 MLB: Maybe home cookin' isn't the answer. With the Sox slated to play 14 straight games against the AL West immediately after the All-Star break, dropping 3 out of 4 at home to the resurgent Texas Rangers wasn't the start anybody was looking for.

So maybe a road-trip was the answer.

Daisuke Matsuzaka was looking pretty good from the very start on the Red Sox first game of their 10-game West Coast road trip. Matsuzaka went 6 and 2/3rds innings striking out 6, walking two and giving up two hits with the only run coming off a solo shot from Oakland LF Rajai Davis in the bottom of the 3rd. I tuned in on XM just in time to hear former A Eric Patterson come home on a Big Papi sac fly in the top of the 4th before Adrian Beltre would put the Sox up for good with a solo shot of this own.

Daniel Bard would only give up a single to Cliff Pennington in an inning and 1/3rd of work and Papelbon came on for a 1-2-3 bottom of the 9th for his 21st save of the season.

NHL: LW Ilya Kovalchuk and the New Jersey Devils have agreed to a 17 year $102-million contract earlier today. The 27 year old winger was traded to the Devils by Atlanta earlier in the season after turning down a 12 year $101 Million extension from that club. Kovalchuk was a free agent after New Jersey's first round loss in the Stanley cup playoffs and was also being courted by the Los Angeles Kings, New York Islanders and SKA St. Petersburg of Russia's Kontinental Hockey League.

It was believed that Kovalchuk's agent and the Kings were close to a deal on Friday.

UPDATE: The NHL has voided Kovalchuk's contract with New Jersey after determining that the lower salary towards the last few years was an attempt to circumvent the league's salary cap. According to the contract, the forward would've been paid $550,000 for the last five years of his contract, which would run through to the 2026-2017 season.
Posted by Fenway_Nation at 9:01 PM