Quickie Sports Chowdah Update, July 15- Wake Me When It's Over 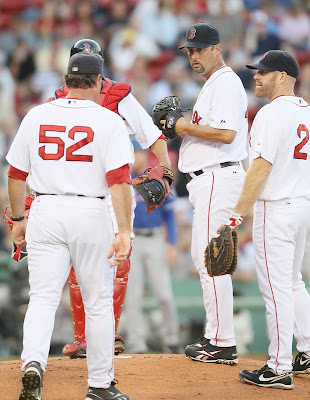 Well, that sure sucked.
Not the glorious, triumphant start of the second half some of us were hoping for. Knocking back a Newcastle at the same establishment I saw Erin Andrews towering over Danica Patrick on the red carpet in all it's 1080i glory, I casually asked the bartender if he could change the flat-screen to the Sox game.

Sometimes one should be careful what one asks for. In the blink of an eye, the Rangers had gone from a 1-0 lead to a 6-0 lead.....with only one out in the top of the 1st inning. This was capped by a Bengie Molina 2 run homer before starter Tim Wakefield got Texas 1B Chris Davis to fly out and struck out CF Julio Borbon. By that point I had to head into work for a few hours- and apparently not much had changed. The Red Sox had gotten on the board on homers by JD Drew and Bill Hall, but those were solo shots late in the game after the Rangers added to their lead in the top of the 3rd with a Nelson Cruz RBI double.

Texas wins the first game of the 2nd half at Fenway by a final of 7-2. Tommy Hunter got plenty of run support while Wakefield lasted all of two innings.

Elsewhere: George Stenbrenner may not have been able to cheat the reaper, but even in death he was able to stay one step ahead of the tax man. Earlier this week, the New York Post reported that Steinbrenner passed away before a 55% Estate Tax was set to take effect in 2011. Had he passed away in 2011, his heirs would've owed an estimated $600,000,000. Similarly, in 2009 his estate would've owed $500,000,000 in taxes, but that lapsed in January of this year and wasn't set to be reinstated until January 2011.
Posted by Fenway_Nation at 12:30 AM