John Lackey got the win against his former team to put him at 10-5 with a 4.26 ERA on the season. The Red Sox were trailing the Angels 1-o for 6 and 2/3rds innings thanks to Angels starter Jared Weaver, but with two outs in the top of the 7th, he walked Darnell McDonald and gave up a single to Marco Scutaro to bring up Jed Lowrie. Lowrie drove home McDonald and Scutaro with a double to put Boston up 2-1.

Boston would get some insurance off of Kevin Jepsen in the top of the 8th when Big Papi was walked, then scored all the way from first base on an Adrian Beltre double.

Anaheim, or the Los Angeles of Anaheim, would get a run back in the bottom of the 8th when Bobby Abreu belted a 1-out solo shot off of Lackey. Daniel Bard would come in the relieve Lackey, and he would get Torii Hunter to strike out, walk Hideki Matsui and get Mike Napoli to end the inning on a flyball to deep center.


The Red Sox would get another insurance run in the top of the 9th when Big Papi hit into the overshift, but Howie Kendrick air-mailed the ball past first base with Scutaro scoring all the way from 2nd.

Wednesday's affair was a day game with the Red Sox travelling back to Fenway to play host to the Detroit Tigers this weekend. Things didn't start out too well for the Angels when scheduled starter Joel Piñeiro was scratched with a left oblique strain and could miss 6-8 weeks. 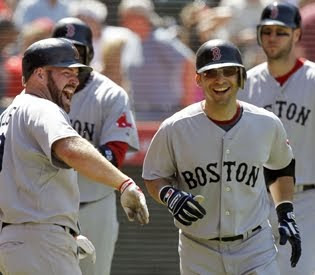 Unlike the earlier games in the series, the Red Sox took the lead first with solo homers from Adrain Beltre and Bill Hall in the top of the 2nd, knocking Halos pinch-starter Scot Shields out of the game. However, the Angels would come right back with two RBI singles in the bottom of the 2nd off of Josh Beckett before taking a 3-2 lead in the 5th inning off of a Maicer Izturis sac-fly.

In the top of the 7th, Kevin Youkilis tied the game with a solo homer into the bullpens. In the next inning, Angels reliever Fernando Rodney walked the first two batters he faced before Eric Patterson reached on a bunt single.

That set up this at-bat by Marco Suctaro:

Anywhoo, the slam was enough to give the Sox the 7-3 win and Beckett the W (making him 2-1 with a 6.33 ERA on the season). Manny DelCarmen and Ramon Ramirez closed out the game on the mound for Boston.

OTHER SOX NEWS: OF Jacoby Ellsbury saw some limited playing time in the Gulf Coast League and is expected to make an apprerence at AAA Pawtucket for this weekend's series against the Durham Bulls. 3B Mike Lowell had just finished up a stint with the PawSox where he went 3 for 4 with a homer on Wednesday night and three homers and five RBIs against the Toledo Mudhens. Lowell could re-join the Red Sox as early as this weekend in the series against Toledo's parent club, the Detroit Tigers.

ELSEWHERE: Houston Astros starter Roy Oswalt has reportedly agreed to a deal that will send him to Philadelphia in exchange for JA Happ and two prospects. Oswalt is 6-12 on the season while sporting a 3.24 ERA for the next-to-last-place team in the NL Central.

The LA Dodgers acquired outfielder Scott Podsednik from the Kansas City Royals for two minor-leaguers yesterday. Podsednik has been batting .310 with 5 homeruns and 44 RBIs for Kansas City this season.

UPDATE 7/29: The San Diego Padres have reportedly acquired SS Miguel Tejada from the Baltimore Orioles for minor-league pitcher Wynn Pelzer on Thursday afternoon. Tejada was batting .269 with 7 HRs for the O's this season and is expected to fill in for Padres infielder David Eckstein who went on the 15-day DL with a strained right calf on July 21st.

The Minnesota Twins have made a move to shore up their bullpen by acquiring Washington Nationals closer Matt Capps for two minor-leaguers on Thursday. The twins will send C Wilson Ramos and relief pitcher Joe Testa to DC in exchange for Capps. Minnesota's closer Joe Nathan will miss the entire 2010 season after undergoing surgery on his right elbow.

The Washington Nationals put rookie phenom Stephen Strasburg on the 15-day DL with inflammation in his right shoulder. Strasburg was scratched from his scheduled Tuesday night start against the Atlanta Braves, although pinch-starter Miguel Batista gave DC a 3-0 win over Atlanta that night. Strasburg is 5-2 with a 2.32 ERA in nine starts this season.

Posted by Fenway_Nation at 7:29 PM