RED SOX: Well, Jon Lester had a gem at SafeCo squandered Saturday and Okajima came in on Sunday and turned a 2-1 lead against the Mariners into a 4-2 deficit, meaning the best Boston could manage against a team that was 20 games out of first place was a split of a 4 game series. 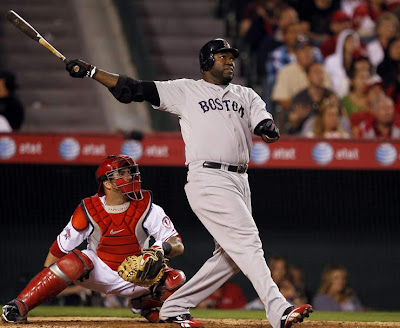 From there, the Sox travelled to Southern California to take on the Angels. Monday night's starter for the Halos was scheduled to be Joel Piñeiro, but the big news from Sunday's trade had a direct impact on Monday's start. After acquiring starter Dan Haren from the Arizona Diamondbacks Sunday, he was announced as the starter for Monday's game against the Red Sox going up against Clay Buchholz.

The Angels got on the board early with a solo homer off of Buccholz by Bobby Abreu in the bottom of the first. The Sox came right back in the top of the second with a leadoff triple by Adrian Beltre, who was immediately brough home by fresh-off-the-DL Victor Martinez on an RBI single. Haren would give up a double to SS Jed Lowrie, but Lowrie and Martinez would be stranded as he worked out of that jam to end the inning.

Not to be outdone, Buchholz worked out of a bases-loaded, nobody out jam in the bottom of the 2nd by getting the next two batters to pop out in the infield and a Erik Aybar flyball to left field.

Big Papi would belt a solo homer with two away in the top of the 3rd to put the Sox up 2-1, and that's the way the score would remain. However, in the top of the 5th, Dan Haren was struck by a Kevin Youkilis line-drive with two out and had to leave to the game. Haren was relieved by Francisco Rodriguez (not that one) and retired the next four batters he faced.

Buccholz would go 7 innings, throw 114 pitches and give up five hits, a walk, seven strikeouts and just the one run off of Abreu. In the top of the 8th, Kevin Youkilis would hit a 1-out single and successfully steal second before David Ortiz would get his 2nd home run ofthe evening to make it 4-1 Red Sox; some insurance that would turn out to be much needed.

Scott Atchison would relieve Buccholz in the 8th, but give up a 2 run homer to Hideki Matsui to make it a one-run game. Not taking any chances, Francona made the decision to bring in Papelbon from the bullpen. Paps rewarded this decision by getting Alberto Callaspo to ground out to end the inning.

The Angels' Mike Kohn would come on in the top of the 9th and log just a single out, instead allowing a walk to Mike Cameron, getting Erc Patterson to pop out to first and giving up a single to Marco Scuatro after a particularly long and tenacious at-bat. This set up a booming 2-RBI double by JD Drew for even more insurance before Rich Thompson would come on and retire the next two batters for Anaheim.

Working with a 6-3 lead, Papelbon came on in the bottom of the 9th and gave up a leadoff single to C Mike Napoli, but would retire the next three batters for his 23rd save of the year.

Boston snaps their 2-game skid Monday night in Orange County by a final of 6-3 with Buccholz getting the win (11-5; 2.71 ERA) and Haren getting hung with the loss in his Angels debut.

Haren appeared to make some post-game comments by his new locker sporting a bandage and saying that his arm was sore, swollen and bruised but otherwise fine. Haren is expected to be re-examined on Tuesday. 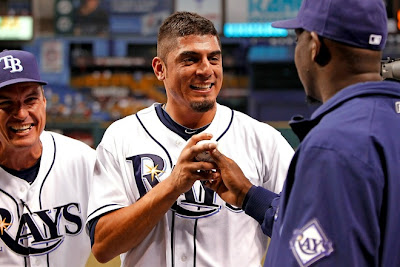 ELSEWHERE: While the Angels-Red Sox game was getting underway, the fifth no-hitter of the season was wrapping up in St. Petersburg, FL. The Ray's Matt Garza went the distance against Detroit, striking out 6 and walking just one runner in 9 innings to give Tampa Bay it's first no-hitter in franchise history. The Rays had already been on the other end of some no-hitters this season, including Dallas Braden's perfect game on Mother's Day at Oakland. The Tiger's Max Scherzer had a no-hit bid going into the bottom ob the 6th as well, but loaded up the bases on two walks and Carl Crawford being awarded 1st on catcher's interference before giving up a grand-slam to DH Matt Joyce to put the Rays up 4-0.

Tampa Bay would win by the final of 5-0. Graza's successful no-hit bid means the only two teams remaining in MLB that have never thrown a no-hitter are the New York Mets and San Diego Padres.

HALL OF FAME : Former outfielder Andre Dawson, manager Whitey Herzog, Umpire Doug Harvey and current Giants broadcaster John Miller were enshrined in the Baseball Hall of Fame in Cooperstown on Sunday. Dawson, who was enshrined as a Montreal Expo (and likely the last player to achieve that) had career batting average of .279 and 438 home runs in his 21 year career. Dawson had this to say in his speech:

“I didn’t play this game with this in mind but I’m living proof that if you love this game, the game will love you back.

San Francisco Giants and ESPN Broadcaster John Miller was awarded the Hall of Fame's Ford C Frick Award at Cooperstown on Sunday as well.
Posted by Fenway_Nation at 11:19 PM