*Authorities in Monterrey, Nuevo Leon acting on an anonymous phone tip have discovered 51 bodies at a garbage dump outside the city. The attorney general for the northern state said that the bodies of 48 men and 3 women have been unearthed so far. While the remains haven't been identified, investigators believe that most of the deceased were involved in drug trafficking, saying that tattoos on some of the bodies would help identify which group they had been working for. Back in May, the Mexican police and military discovered an abandoned silver mine in the city of Taxco where the cartels had dumped at least 55 bodies.

*The warden and three other officials from a Durango prison are under house arrest after state prosecutors say the prison officials lent out weapons and vehicles to some of the inmates so they could carry out killings in Torreon, the capital of the neighboring state of Coahuila. This included a massacre of 18 party goers on July 18th as well as shootings dating back to February and May.

.
Similar ballistics tests linked the guns to earlier killings at two bars in Torreon, the capital of northern Coahuila state, he said. At least 16 people were killed in those attacks on Feb. 1 and May 15, local media reported.I think I posed the question even before Calderon's state visit, but it bears repeating- How would additional gun control laws on this side of the border prevent further violence in Mexico when you have elements of the police in military operating at the behest of the cartels? And for those of you who think the police or military issued murder weapons are limited to those four rifles issued to the prison guards in Durango, I have a bridge in Brooklyn I'd like to sell you for a modest fee. 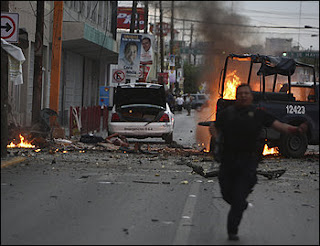 *Also last week, a car bomb detonated in Ciudad Juarez across the river from El Paso, TX, killing two policemen and a doctor. Investigators on both sides of the border say the bombing is the first of its kind in Mexico and represents an escalation in tactics and increased sophistication of attacks on the cartel's part. Local police and paramedics were lured to the scene by calling in a false report that a police officer had been shot and then detonated a 22 pound bomb in a nearby parked car by cell phone. Explosives experts with the ATF have been helping their Mexican counterparts reconstruct the bomb as best they can.

So far it's been determined that the device was made from Tovex, a water gel based explosive and it would likely have to have been triggered while within sight of the rigged vehicle.

Graffiti written on the wall of a nearby elementary school specifically warned DEA and FBI agents that more bombs would follow unless the US Agencies investigated alleged links between the Sinaloa cartel and Mexican authorities.

*A Kuwaiti newspaper reported earlier this month that Mexican authorities had thwarted an attempt by Hezbollah operatives to establish a network in the country using Mexican nationals with family ties to Lebanon or of Lebanese descent themselves. The leader was residing across the border from San Diego, CA in Tijuana, Baja California at the time of his arrest.
Now....I know some of you might be saying 'What? Mexicans of Lebanese descent? You're just making stuff up. I've never heard of something so silly and farfetched'. To which I would have to reply- yes there is such a thing, actress Salma Hayek and billionaire Carlos Slim being the more prominent examples. 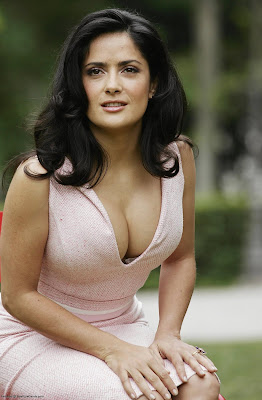 [I would also have to add 'Thanks for the completely gratuitous opening to toss out some Selma Hayek-centric ocular sweetness!' Oh....and legal disclaimer; I'm in no way inferring that Mr. Slim or Salma Hayek are Hezbollah operatives. Please don't sue me - NANESB!]


According to the report, Mexican police mounted a surveillance operation on the group's leader, Jameel Nasr, who traveled frequently to Lebanon to receive information and instructions from Hezbollah commanders there.
Nasr was living in Tijuana, Mexico at the time of his arrest, the report said. The report follows warnings from the United States that Hezbollah and its backer Iran are stepping up operations in the region.

Nasr also travelled to other parts of Latin America, including Venezuela. I wouldn't be too shocked if he went to the tri-border region along the Argentina, Paraguay and Brazilian border if he's indeed a Hezbollah true-believer.

*With widespread corruption and resources focused on the bloody, ongoing narcoinsurgency, logistics experts are noticing a rise in thefts targeting Mexico's trucking and railroad industries. Gangs of thieves, sometimes posing as police and setting up bogus roadblocks, will hijack tractor trailers at gunpoint, offload cargo to another trailer, or hitch the trailers to their own cabs.

Railway robberies are a little more labor-intensive, however:

Acting to slow the rampant holdups of trains, Mexico's Congress categorized train robbery as a "serious crime" in late April and toughened sentences to 10 to 30 years in prison. Unlike in the past, train-robbing suspects won't be freed on bond before trial.

The president of the Mexico subsidiary of Kansas City Southern, Jose G. Zozaya, said his railway was "not immune to being hit by organized crime."

He said it had employed tactics such as moving trains faster, using "jump teams" of responders when situations developed and fostering good support from state and federal police to minimize robberies of cargoes that include fuel, steel, grains, petrochemicals, auto parts and new automobiles.

"Our competitors have had autos stolen off their platforms multiple times," Zozaya said, noting that Mexico is a major exporter of new cars.

It's thought that the cartels may have a hand in this, diversifying their operations beyond drug-smuggling and human smugging.

Criminals have also been siphoning fuel and oil off of pipelines owned by the state-run oil company PeMex. This weekend, Mexican soldiers on patrol in Tamaulipas have raided a cartel safehouse with a small arsenal of guns, ammunition and grenades as well as a lot that contained oil tanker-trailers filled with oil believed to have been siphoned off of a PeMex pipeline.

Also over the weekend, Mexico's Defense Ministry reported that soldiers seized 59 pounds of explosives (including Tovex, which is believed to have been used in the Juarez car bombing last week) and killed 9 gunmen after clashing with smugglers at the rural village of La Simona in northern Chihuahua. Besides the explosives, 40kg of marijuana, 15 rifles, 3 pistols, 3 bulletproof vests, a roll of detonator cord, 10 vehicles, three satellite phones and some night vision goggles were found.
Posted by Fenway_Nation at 11:38 PM