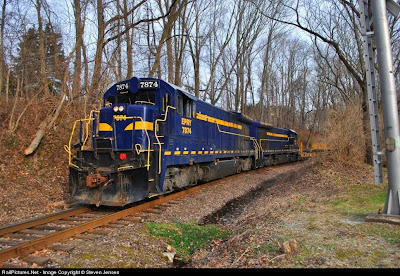 Today's train of Thought features another line that's gone through a number of owners over the last few decades. The former Reading line between Wilmington, DE and Reading, PA was not included in the 1976 formation of Conrail, nor was the branch that extended southeast from Chadds Ford, PA to the Maryland state line at East Nottingham Township, PA.

The Commonwealth of Pennsylvania immediately claimed the lines in the hopes of eventually expanding the SEPTA Network south and west to Chester county, PA.

Even with the line cut back to Coatsville, PA as its northern terminus, there was still frieght to be hauled on the line, including Herr Foods in Nottingham. The first such operator was the Octoraro Railroad, which started up in 1977 but filed for bankruptcy in July 1994. One of Rail America's earlier properties- the Delaware Valley Railroad was designated by the Pennsylvania DOT to take over operations of the line until 1998 when the Bethlehem Steel-owned Brandywine Valley Railroad got permission from PA DOT to operate the length of the line from Coatsville to Wilmington. However, Bethlehem Steel would go bankrupt in 2001 and its assets sold off to International Steel Group (later Arcelor-Mittal) two years later, with the Brandywine Valley reduced to the steel mill trackage around Coatesville.

This left the PA DOT scrambing to find another operator- this time New Jersey Based Morristown & Erie in 2003 was given the reigns until arrangements were made in late 2004 with the East Penn Railroad- a shortline operator with extensive background in operating several disconnected branchlines in the reigon. The former Octoraro/Delaware Valley line became the East Penn's Wilmington & Northern branch and to this day sees some failry robust carloadings in the form of scrap, steel, paper, grain, cotton seed oil and foodstuffs for Herr's. And even back in the Octoraro days, the need for bigger power was understood. The East Penn went with GE Dash 7s purchased secondhand from Conrail and Union Pacific.

Here, railpictures.net contributor Steven Jansen caught two of the ex Espee GE's rounding a tight curve at Granouge, DE heading south to the CSX interchange at Elsmere, DE on the next-to-last day of 2009 after starting it's trek ion Kennet Square, PA. B30-7 #7874 is in charge of this southbound with what looks like a cut of finished product from the Arcelor-Mital plant in Coatesville.
Posted by Fenway_Nation at 9:42 PM