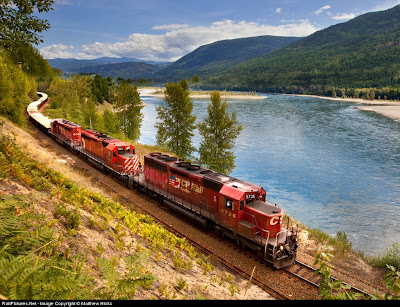 Today's Train of Thought comes to us from north of the border in honor of Canada Day. While CP is best known for it's scenic and legendary transcontinental line through the Rockies, it also operates a second line winding through the Canadian Rockies in Southern British Columbia that crosses the rockies at Crowsnest pass.

This also happens to be where the headwaters of the Columbia River are located, with CP Rail SD40-2 #5736 leading a trio of red six-axle motors along the banks of the Columbia with a string of cars carrying aggregates in tow at Castlegar, BC. Railpictures.net contributor Matthew Hicks caught Train 564 treading through this majestic scenery on a seemingly perfect August 11, 2009 on its way to Trail, BC.

Those Red & White CP SD40s sure do get around, don't they?