The editor of the El Centro, Ca Imperial Valley Press issued a written apology over a political cartoon that ran in the newspaper earlier this month. 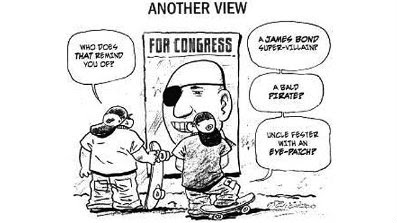 The cartoon (shown above) depicts two skateboarders standing in front of a poster showing Congressional candidate Nick Popaditch, an Iraq War veteran with the Marines who lost his eye in an RPG attack during the Battle of Fallujah in 2004, wondering if the poster is supposed to depict a James Bond villain or a bald pirate. Defenders of the cartoon say it was making light of the public's ignorance about the candidates, not Popaditch's war injuries [I think the point could've been driven home much better if the dullards in question were of voing age and traded in their skateboards for Priuses with Obama/Biden '08 stickers- NANESB!]

"As a Marine I've certainly been hit by worse, it's not like I'm some sort of delicate flower that's damaged by this" says Popaditch. 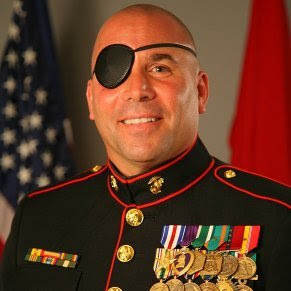 Popaditch, also known as 'Gunny Pop' or 'The Cigar Marine' served in both Desert Storm and Operation Iraqi Freedom and is perhaps best known for being one of the Marines that helped topple the statue of Saddam Hussein in 2003 during the fall of Baghdad. The 2004 firefight that cost him nearly 92% of his eyesight marked the end of his Marine Corps career. As a civilian, he found work as a motivational speaker, authored a memoir titled Once a Marine and enrolled in San Diego State University with the goal of becoming a high-school teacher before deciding to challenge Congressman Bob Filner.

Not to be outdone in the 'douchebaggery directed at Veterans department', a columnist for Imperial Valley's Holtville Tribune had this to say last week:

What better topic than a story about an editorial cartoon that supposedly discredited a veteran because of an eyepatch he wears.
Since eyepatches make people look sexy and mysterious, we’re not sure what all the shouting is about.
Nick Popaditch is not exactly a household name even though he’s running for Congress.
As a result he needs a little help calling attention to himself. How about an eyepatch? How about making an issue out of a tasteless cartoon about a man with an eyepatch?
Well, if getting his name known better was the goal, he has done that. He at least got into my conscienceness. Before an I.V. press editorial cartoon supposedly poked fun at his eyepatch, my only recognition of him was a small billboard posted on Fifth Street in Holtville. “Who’s that? I asked as I drove by it several times. Well, at least I know he is a war veteran who had an eye injury. And if he capitalizes on all this noise that’s being made about the cartoon, we may even find out more about his stance on the issues.
If you’re running way behind and its summer and nobody knows much about you, then a good size controversy can help you over the doldrums and into the election season.
We haven’t seen anything about his response, if he has made one. Perhaps he’s too distraught to speak. We doubt it. We hope he takes advantage of the situation so we will actually get some information about him.
As for the I.V. Press editorial cartoon, it was an exercise in tastelessness, but this is still a free country where you can speak, or draw, what’s on your mind. How sensitive can one person be? If his feelings, or those of his supporters were hurt, perhaps he should try some less strenuous form of work other than being a political candidate. From his website, or at least one of them touting his candidacy:
“For the record, Nick spent 16 years in the Marine Corps, led men in and out of combat, achieved the rank of Gunnery Sergeant, lost most of his eyesight for his country, and was awarded the Silver Star.”
So, what’s he going to do for me and the people of Imperial Valley?
A Congressman is supposed to take care of his district. This was probably a pretty good trick to get his name out in front of the public without any cost involved.
We’ll see if he uses it to his advantage. His website only offers negatives and military rhetoric.
Well, it’s still only July. We’ll see where he is in October. Considering the uproar his followers created, we have to wonder what his stand is on the Bill of Rights. Maybe he’ll give us some answers.

Even though it was unintentional, I think the "So, what's he going to do for me?" line parodies the ignorance and shallowness of the media and public far better than the cartoon with the skateboarders in front of the poster.

As a bonus, this hack threw in the requisite 'Elp! 'elp! Oi'm bein' repressed!' free speech/press martyrdom inference crap, as though any reaction to the cartoon isn't just as protected under the Bill of Rights as the cartoon itself is.

And as for the website offering only "military rhetoric" and "negatives", I have to wonder what's so positive about a congressional district that has an unemployment rate as high as 27.9% and Mexican criminals brazenly gunning down Border Patrol agents?

If- by using the 'taking care of your district' claim as a yardstick, how well has Congressman Filner taken care of his district?

Posted by Fenway_Nation at 9:40 PM