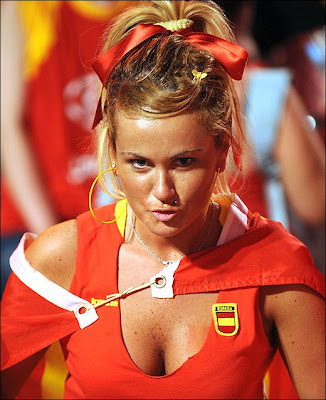 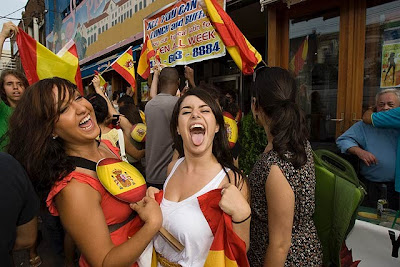 At long last, the FIFA 2010 World Cup is mercifully over. Marred by questionable officiating and incessant vuvuzelas throughout, the 2010 tournament was put out of it's misery with a final showdown between the Netherlands and Spain on Sunday. 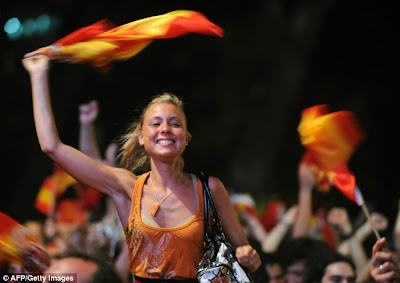 Now granted this was between a team that hadn't advanced to the finals in over 30 years versus a team that had never finished better than 4th place making an appearance in it's first-ever World Cup final, but neither one of them really seemed like plucky underdogs that had overcome long odds to get where they were. Then again, that's probably why they got as far as they did in the first place.

Andres Inesta scored the game's only goal with 4 minutes left in injury time, breaking a scoreless tie and negating the need for a penalty shootout at Johannesburg's Soccer City. Spain beats the Netherlands by a final of 1-0 to win its first ever World Cup title. 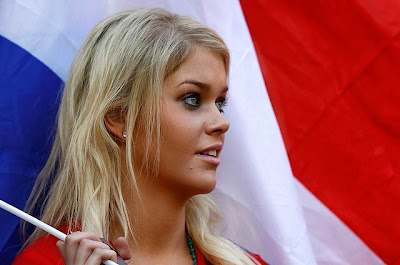 As for the Dutch....umm....well....at least those sea walls are holding up well and the North Sea hasn't reclaimed 2/3rds of your country.

Other World Cup News: Oracle Paul has been getting death threats from irate fans. Some of those death threats have taken the form of calamari recipies. Paul is an octopus residing at the Sea Life aquarium in Oberhausen Germany who went 8-0 in his World Cup picks. Paul would 'predict' the winner of an upcoming match by having his food lowered in two seperate boxes throughout the tournament- each marked with the competing nation's flag. Whichever box Paul went into first was deemed his pick, and much to the chagrin of German, Dutch and Argentine football fans, his 'predictions' have come true. Aware that Paul's safety could be in jeopardy due to his accurate but unpopular picks, some Spanish officials have offered Paul sanctuary in the Iberian peninsula while some Spanish businessmen have made a €30,000 offer for 'Pulpo Paul'.


MLB: The Red Sox came into Sunday's game losing 5 out of their last 6 contests, so Sunday was as good a day as any to try and stop the bleeding heading into the All-Star break.

Getting no-hit for the first five innings probably wasn't the best way to go about it. To make things even more interesting, there were mechanical problems with the retractable roof at the Rogers Centre, leaving much of the infield in shadows for the first 4 innings, making it that much more difficult for batters to see the ball leave the pitcher's hand [this didn't provide the Jays with that much of an advantage, either- NANESB!]

However, the Red Sox were able to break up Jesse Litsch's no-hit bid in the top of the 6th with a Marco Scutaro double. Darnell McDonald would bring Scutaro and himself home with a homer to deep left to break the scoreless tie with 2 outs before being followed up by a solo-shot from Big Papi to put Boston up 3-0. Toronto's Aaron Hill made it a 1-run game in the bottom of the 6th with a 2-run homer off of Daisuke Matsuzaka. Matsuzaka was good for 6 innings of work, allowing six hits, two runs and five strikeouts while Daniel Bard held the Jays hitless over the next two innings and Papelbon closed it out for his 20th save.

Of course, today's win came with a price. 3B Adrian Beltre- who was named to the All-Star team- left Sunday's game in the 6th inning with what is belived to be a strained left hamstring. Beltre says he is day-to-day and will travel to Anaheim for the Mid-Summer Classic and determine whether or not he should play from there.

The Red Sox will host the Texas Rangers immediately after the All-Star break. Tim Wakefield is tentatively scheduled to be the starter 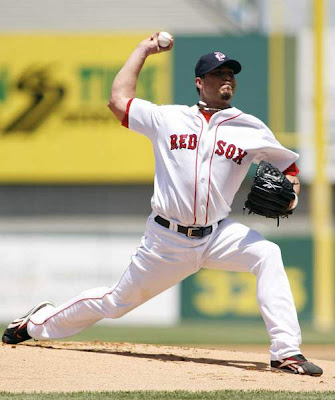 OTHER RED SOX NEWS: Josh Beckett gave up two hits and one run- a solo homer- in four innings of work during Sunday's PawSox home game against the Syracuse Sky Chiefs at McCoy Stadium. No firm timetable has been set for Beckett's return.

ELSEWHERE IN MLB: Longtime Yankees Stadium PA announcer Bob Sheppard, sometimes dubbed 'the voice of God' by New Yorkers, passed away at age 99 in his Long Island home on Sunday. Sheppard started out with the Yankees in 1951 and during the final year of the original Yankee Stadium Sheppard's voice was recorded and then used to announce lineups over the PA system due to his deteriorating health.

The Texas Rangers- despite bankruptcy and an uncertain ownership outlook- managed to pull off the biggest trade of the season so far with their acquisition of pitcher Cliff Lee from the Seattle Mariners for 1B Justin Smoak and three minor leaguers. Earlier in the week, the Yankees were considered the runaway favorite in the Cliff lee sweepstakes.

NBA: Shortly after LeBron James' announcement of joining the Miami Heat, Cavs owner Dan Gilbert accused the NBA star of quitting in the middle of the playoff series against Boston and claimed Cleveland would win an NBA title before Miami would. Attention whores Mark Cuban and Jesse Jackson have also chimed in on the whole LeBron deal, but I tend to tune them out.....
C Jermaine O'Neal signed a two year deal with the Celtics on July 8th.
Posted by Fenway_Nation at 11:45 PM