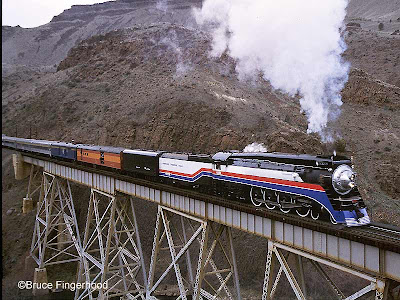 Since today is no ordinary day, I thought Today's Trains of thought could deal with themes like Determination and Redemption....and of course....fireworks.

Southern Pacific's 1941-built Lima GS 4-8-4 'Mountain' was withdrawn from 'Daylight' service in 1957 and put on display in a Portland, OR park upon retirement. There, she was vandalized and stripped for parts by opportunistic scavengers until she was 'scouted' in 1974 for something called the American Freedom Train. This was actually the second train to go by that name- Harry Truman's At tourney General, Tom C. Clark, proposed the train as a means of reawakening the American public to the nation's history and liberties in the Post WWII-era. The 1947-1949 Freedom train carried original copies of the US Constitution, Bill of Rights and Declaration of Independence, accompanied by US Marines at all times. The idea for a second 'Freedom Train' came about in the mid 1970s in time for America's bicentennial, although it carried different items like an original copy of the Louisiana Purchase and Martin Luther King's pulpit and robes as well as a moon rock brought back by NASA.

Despite the vandalism and scavenging, the bearings and rods for #4449 were determined to be in good shape, making her a prime candidate for the Bicentennial Freedom Train. After a mow months of restoration work, the 4449 along with former Reading Baldwin 4-8-4 Consolidation T1 #2102 (which was operating as recently as 2005 in Washington State) and former Texas & Pacific Lima 2-10-4 Texas class #610, the Bicentennial Freedom train would tour the 48 contiguous states. The #4449 would go back to being repainted in er former orange and yellow 'daylight' colors and work numerous excursions over then next 25 years- mostly around Portland, OR- and is currently operated by the Friends of the 4449 and the Oregon Rail Heritage Foundation.

In the wake of the September 11 attacks, somebody at the roundhouse in Portland got it in their minds to 'restore' 4449 to her bicentennial American Freedom Train as a point of pride. In the spring of 2002, she emerged from Portland, OR's Brooklyn Roundhouse in the AFT Red White & Blue and operated a series of long-haul excursions over BNSF's Oregon Trunk line. Above, photographer Bruce Fingerhood catches the meticulously repainted Lima charging over Trout Creek Trestle on the BNSF Oregon Trunk Line en route to Bend, OR in March 2002. The 4449 returned to her original color scheme the following year. 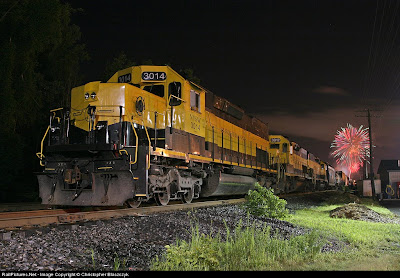 But what would the 4th of July be without some fireworks? Here, New York, Susquehanna & Western SD40T-2 #3014 and two other 'yellowjacket' tunnel motors are done for the day and awaiting a new crew before taking train SU-100 further east on this summer 2008 Binghampton, NY evening but the fireworks at the Binghampton Mets' NYSEG stadium are just getting under way. Railpictures.net contributor Christopher Blaszczyk was the intrepid photographer who found the yellow and black tunnel motors in repose at Binghampton's BD Cabin.

Like the #4449, NYSW #3014 had spent much of its working life on the Southern Pacific before being struck from the roster and moving elsewhere.

Posted by Fenway_Nation at 3:31 AM