SWITZERLAND: A Japanese tourist was killed and 40 others were injured when the last three cars of the 6-car Glacier Express derailed on July 23rd in Fiesch Switzerland. Sometimes known as 'The Slowest Express Train in the World', the Glacier express travels between Zermatt and St. Moritz, Switzerland at an average speed of 30km per hour with coaches featuring specially designed panoramic windows.

Authorities have yet to determine a cause of the derailment, although there is speculation that a heat kink (where a small portion of the track is warped by a dramatic change in temperature) could've played a role. The line remained shut down while authorities continue to investigate the scene. This is the most serious rail accident in Switzerland since 2006, when three people were killed in a collision with a runaway train. 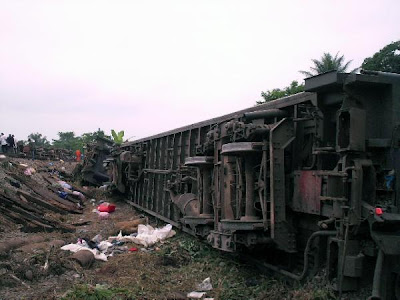 CONGO: At least 76 people were killed and more than 700 injured when a passenger train travelling Pointe Noir and Brazzaville in Congo (the marginally more stable and less strife torn Congo as opposed to the much larger and more dysfunctional People's Democratic Republic of the Congo immediately to the South and formerly known as Zaire) derailed and four cars plunged down a ravine. According to a state radio broadcast, the cause of the derailment was excess speed while the train was entering a curve.

There are only a limited number of highways linking Congo's main port of Pointe Noire and the capital city of Brazzaville. The 502km Chemin de Fer Congo-Ocean (Congo-Ocean Railway) was completed in the 1920s using conscripted labor. To this day, the line sees significant freight and passenger traffic through the mountains and equatorial rainforest while a Chinese-backed $500 million highway project is in the planning stages. This is the African nation's worst rail accident since 1991 when a collision between a freight train and passenger train just east of Pointe Noire killed at least 100 people.

SPAIN: 13 partygoers were killed on June 23rd in Castelldefels, Catalona, Spain while en route to a St. John's Eve beachfront party. The deceased, identified as immigrants from different parts of South America, were struck by a high-speed train passing through the station when they tried crossing the tracks between platforms to avoid using a crowded pedestrian underpass. At the time of the collision the high-speed RENFE train was travelling at 85 MPH, which was actually below the speed limit. 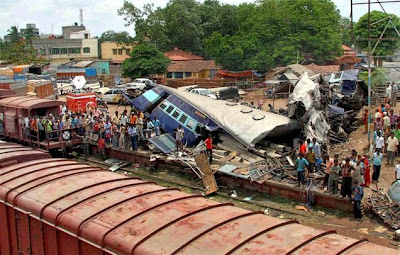 INDIA: A collision between two passenger trains in West Bengal on July 19 left 66 dead and 165 injured. The Uttar Banga Express slammed into the rear of the slower moving Vanachal Express in Sainthia station. Eyewitnesses estimated the Uttar Benga express was travelling anywhere from 80-90 km per hour upon impact when the station's track speed was only 30 km per hour. The impact sent the three rear cars of the Vanachal express crashing into an adjacent pedestrian bridge over the tracks.

At this time, investigators are still attempting to determine a cause. One theory was that the crew in the locomotive was drugged or unconscious, although a post mortem didn't indicate any traces of drugs. Eyewitnesses at the Uttar Benga Express' previous stop- just 10km away- saw nothing out of the ordinary with the crew there. However, the head end crew did not apply the brakes or attempt to jump when a collision was imminent.

An India Railways investigation found that the brakes were in working order. Some media outlets have speculated that the Vanachal Express was running behind because the crew was offloading some off-the-books freight at Sainthia. However, this would not account for the Uttar Benga Express travelling nearly triple the speed limit and making no attempt to stop immediately before the collision. The Sainthia station master unsuccessfully attempted to contact the head end crew of the Uttar Benga Express via radio, but that was only 30 seconds prior to impact.

More recently, investigators are looking at whether or not the signals immediately before the Sainthia station were working properly. 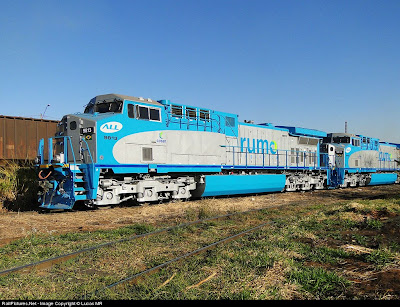 BRAZIL: ALL Logistica [BOVESPA: ALLL11] and Cosan ltd. [NYSE: CZZ] have announced a joint venture in Rumo Logistica, a multimodal logistic system for the storage and export of bulk quantities of sugar (and byproducts such as ethanol) produced by Cosan to export at the port of Santos in São Paulo state. To accommodate the anticipated increase in carloadings, Cosan and ALL have purchased some brand new GE C44-9Ws painted in this striking sliver and blue scheme.

The Brazilian government has also entered into talks with ALL Logistica, MRS Logistica and VALE S.A. [NYSE: VALE] over proposed rules designed to increase capacity and competition and cut freight costs. Transportation minister Paulo Passos says President Luiz Inacio Lula Da Silva plans on issuing a decree calling for an increase sharing of assets and put idle or abandoned right-of-ways back in operation in order to sharply reduce the price of hauling freight. Under this agreement, the Brazilian government would be responsible for building any new right of way. The transportation said that President Lula's plan would further reduce the nation's dependence on freight hauled by truck [No word on if any of VALE, ALL or MRS's representatives sent a Portuguese-language edition of Atlas Shrugged off to Lula's office in response- NANESB!] 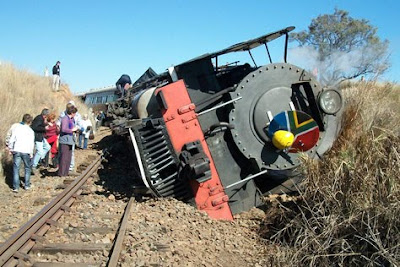 SOUTH AFRICA: A Father's Day steam-powered excursion train derailed on a branch line between Pretoria and Cullinan, South Africa. None of the 627 passengers on board were seriously injured and were subsequently bussed to their destinations from the derailment site. Investigators and railway officials almost immediately noticed some 50 ties missing from the tracks near the Cullinan station and believe that to be the cause as the train was operating at low speeds on the branch.

South African Preservation Group Friends of The Rail is putting forward an appeal for funds towards repairing some of the coaches involved as well as 4-8-2 #3117, built in 1947 by the North British Locomotive Company in Glasgow, Scotland.

Unfortunately, this isn't the first accident of the year involving restored rolling stock and equipment in South Africa. Three workers were killed when coaches from the Rovos Rail luxury train rolled away from the locomotives that were being swapped at a station stop in Pretoria back in April.

More recently, an ore train on the Saldhana line in Western Cape province derailed on July 24, closing down the iron-ore hauling route until repairs could be made. There were no reports of injuries, although it was anticipated the mishap would affect iron ore output over the next several days. 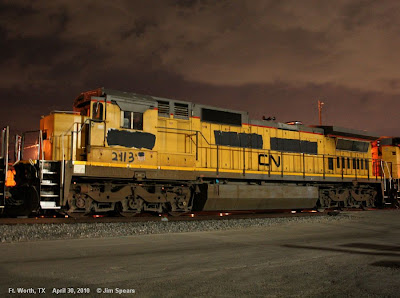 CANADA: In a surprise move, the Canadian National purchased 35 GE C40-8s secondhand from Union Pacific. Canadian Railway Observations reports that the CN paid near-scrap prices for the 20 year old six-axle 4000 HP units and they will be repainted and overhauled in the former Illinois Central shops in Homewood, IL and Centralia, IL for DPU service systemwide. This was followed up by the purchase of 30 former Santa Fe/BNSF C40-8Ws that had been idle for nearly a year with the downturn in traffic. The purchases of the secondhand GEs coincides with the retirement of most of the ex-IC SD40-2s that CN 'inherited' with their 1998 acquisition of the Illinois Central. 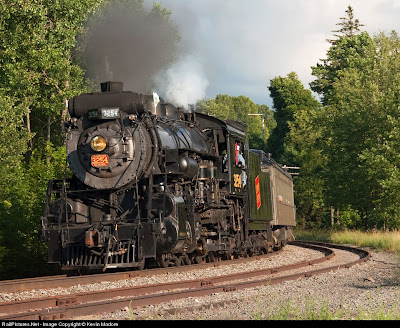 USA: 'Endless Mountain Rails', the 2010 NRHS convention in Scranton PA, has wrapped up [which doesn't make it so endless, I guess- NANESB!]. A series of excursions were run out of the Steamtown National Historic site in downtown Scranton, although complications arose on June 24th when a truck collided with the Delaware-Lackawana bridge south of Moscow, PA, bending the rails prior to a Delaware Water Gap excursion. The excursions were initially powered by former Canadian National 2-8-2 Mikado #3259- Steamtown's workhorse- but the decision was made to use diesels like the Delaware-Lackawana RS3s and a duo of restored former Reading Railroad FP7s (neither of which were too far removed from the steam era themselves) which would've made it easier to pass the affected trackage than with the #3259. 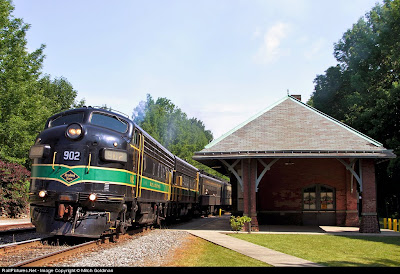 Here, Reading FP7 #902 is seen charging past the former Delaware, Lackawana & Western depot in Moscow, PA with one of the Delaware Water Gap excursions on June 26th. 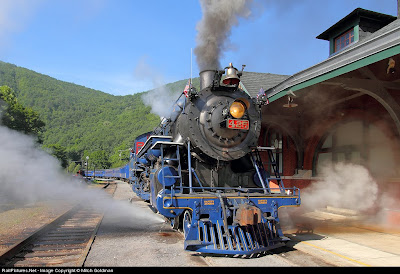 Not one to be outdone, the Reading and Northern also ran concurrent excursions out of their Jim Thorpe, PA depot to wrap up the end of the NRHS convention and in preparation for the busy 4th of July weekend. Here, the R&N's stunning #425 is getting ready to head out over the former CNJ line out of Jim Thorpe and through Lehigh Gorge State Park on the 4th of July.

Posted by Fenway_Nation at 9:41 PM