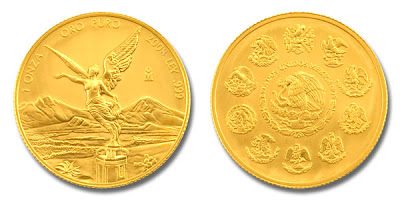 ABC News is reporting that a little known provision tacked onto 0bamacare set to take effect in less than 2012 will oblige precious metals and coin dealers to file IRS form 1099s for transactions of $600 or more. With gold currently selling for more than $1200 an ounce, that would mean a 1099 would basically have to be filed whenever a customer purchased or sold to them more than a half-ounce of gold.

Rep. Daniel Lungren, Republican (CA-3), has introduced legislation to repeal the section of the health care bill that would trigger the new tax reporting requirement because he says it's a burden on small businesses.
"Large corporations have whole divisions to handle such transaction paperwork but for a small business, which doesn't have the manpower, this is yet another brick on their back," Lungren said in a statement e-mailed to ABCNews.com. "Everyone agrees that small businesses are job creators and the engine which drives the American economy. I am dumbfounded that this Administration is doing all it can to make it more difficult for businesses to succeed rather than doing all it can to help them grow."
The ICTA's [Industry Council for Tangible Assets] Piret says identity theft is another concern because criminals may set up shops specifically to extract personal information that would accompany the filing out of a 1099.
The office of the National Taxpayer Advocate, a citizen's ombudsman within the IRS, issued a report June 30 that said the new rule "may present significant administrative challenges to taxpayers and the IRS."

And for those of you who think gold coins or bullion are the exclusive pursuit of monocle wearing Uncle Pennybags-types who light cigars with $500 bills, you would be dead wrong. Coin shops are generally small businesses whose clientele typically includes the working class who don't trust the stock market or banking system and want to own physical gold as a hedge against inflation and currency devaluation.

Earlier this year, Washington state had proposed removing tax breaks for bullion and precious metals retailers in the state. Naturally, the coin shops- which could hardly be considered powerful and influential special interest groups themselves- objected, pointing out that even in good times, they operate on a profit margin of 1% to 3% and that customers would simply buy their gold and coins out of state.

Even less surprisingly, state government employee unions came out in support of the proposal, hoping that it could ward off salary, benefit and job cuts.

Larger gold companies such as Goldline, who are regular sponsors of conservative talk shows, have come under attack from politicians such as Anthony Wiener (D-Probably Got Beat Up Alot As a Kid With That Name) accusing the Company of using 'fear mongering' and colluding with talk show hosts to drive up sales [Because as the last 18 months have indicated, we have absolutely nothing to fear under 0bama's stewardship of the US Economy- NANESB!]. These accusations come despite an A+ rating from the Better Business Bureau.

Nobody said I had to pay a fine or go to prison if I didn't use Goldline's services- can I say the same for health insurance thanks to you, Wiener?

If Congressman Wiener is so interested in consumer protection when it comes to precious metals transactions, maybe he could take a long look at some of these companies that say they'll buy your gold via the mail. Besides usually paying less than what the gold is worth, I have to wonder what safeguards there are to make sure they're not receiving stolen property. Lord knows a brick and mortar pawn shop would be in plenty of trouble with the law if they're caught in possession of stolen goods.
Posted by Fenway_Nation at 10:34 PM